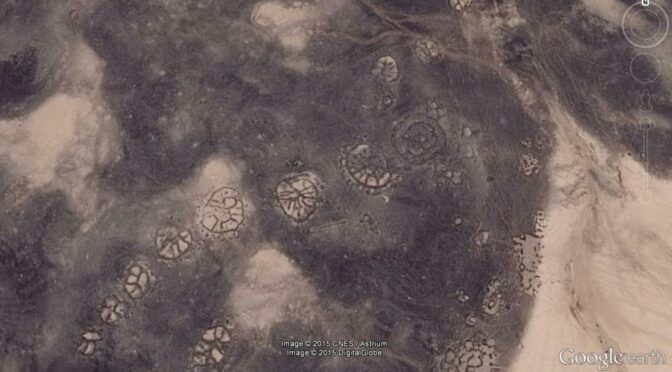 These Mysterious Geoglyphs in Jordan Are 6,000 Years Older Than Peru’s Nazca Lines

Although the finished product of giant earth designs has been difficult to discern, archeologists recently announced that at least some of the great “works of old men” (as the Bedouin called them in 1927) of the Middle East are significantly older than the famous Nazca Lines of Peru.

Researchers have also shown that, in the past, one cluster of the wheels could have been linked with astronomical knowledge and that some of the geoglyphs were probably connected with the burials.

It has been concluded by archeologists that at least two of the giant Wadi Al Quattafi ‘ Wheels ‘ from Wadi Al Qattafi and the Wisad Pools, in the Black Desert of Jordan are at least 8,500 years old – making them older than the famous Nazca Lines in Peru by about 6,000 years.

BBC reports that by using optically stimulated luminescence ( OSL), the archaeologists were able to show not only the date of creation of the two wheels but also that one of them was repaired about 5,500 years ago.

The research, soon to be published in the journal Antiquity, demonstrates that at the time of the creation of these two wheels the climate of the Black Desert would have been very different, making life in the area easier.

Archaeological evidence for their claim came in the form of “Charcoal from deciduous oak and tamarisk [a shrub that] were recovered from two hearths in one building dated to ca. 6,500 BC.”

Furthermore, Discovery News has reported that the recent study suggests that at least some of the geoglyphs are related to an astronomical interest by the ancient inhabitants.

Specifically, they have found importance in one group of designs in the Azraq Oasis, as “The majority of the spokes of the wheels in that cluster are oriented for some reason to stretch in a SE-NW direction – where the sun rises during the winter solstice.” This may be no more than an educated “hunch” however, as other geoglyphs in the area do not show apparent “archaeoastronomical information.”

The two wheels and the cluster make up just a small section of the famous “Works of Old Men” that cross the Arabia region – “from Syria across Jordan and Saudi Arabia to Yemen” according to the researchers from the current study.

The geoglyphs of the Middle East were first spotted in 1927 by RAF Flight Lt. Percy Maitland, while he was flying an airmail route over Jordan. he has written.

Some of the wheel-shaped structures are clustered closer together, while others appear to be solitary. Some structures have more of a rectangular shape, while many of them are round. Some of the circular structures contain two spokes that form a bar…The wheels are sometimes found on top of the kites.

The purpose of the geoglyphs probably varied according to their location and/or design.

Gary Rollefson, co-director of the Eastern Badia Archaeological Project, says that “The presence of cairns suggests some association with burials since that is often the way of treating people once they died.” However, he was also quick to add that “there are other wheels where cairns are entirely lacking, pointing to a different possible use.”

Regarding the construction of the geoglyphs, it is evident that quality also differs from one structure to the next. Speaking of the two wheels in the Black Desert, Rollefson said that they “are simple in form and not very rigidly made, according to geometric standards.

They contrast sharply with some other wheels that appear to have been set out with almost as much attention to detail as the Nazca Lines.” The precision of the other wheels may have been due to the use of a long rope and a stake.

In contrast to the designs located further north, David Kennedy, co-director of the Aerial Photographic Archive for Archaeology in the Middle East  (APAAME) has said that the forms in Saudi Arabia and Yemen “tend to be small and have only one or two bars instead of spokes.

Some of the “wheels” are actually shaped like squares, rectangles or triangles.” The APAAME has also noted kites and interconnecting walls of stones, which he has dubbed as “gates.”

APAAME is currently unable to conduct on-site or aerial imaging research of the “wheels” in Saudi Arabia and Yemen, thus they are studying aerial images from the 20th century and free satellite imaging from Google Earth and Bing for now. 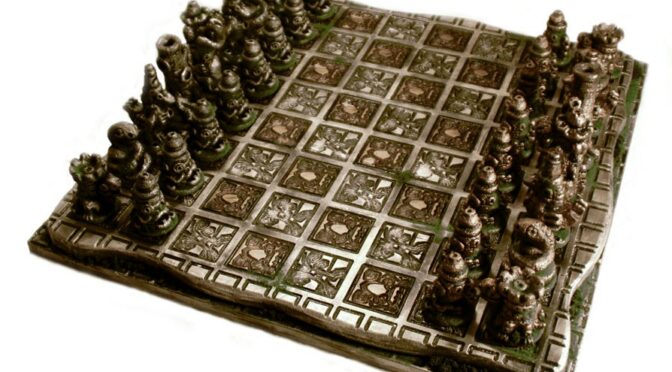 The oldest piece of chess ever discovered was a carved rock found in 1991 by a Canadian scientist and archeologist.

In an abstract published in October, the University of Victoria professor John Oleson announced that a piece of carved sandstone that was found in southern Jordan at Humayma may be an ancient rook — a castle-shaped piece in the game.

The roughly 1,300-year-old stone is squat and rectangular, with “horn-like projections”.

Although Oleson mentions it does resemble other artifacts, such as a Nabataean butyl, which is an altar made out of a block of stone to evoke the gods of the ancient Arab nation, when he compared the rock carving to other early chess pieces, the parallels were “far more convincing.”

According to Oleson, the object has the same abstract shape that other early Islamic chess pieces had.

References to chess-playing can be found in Islamic texts as early as the seventh century AD, Oleson said, and the game was “very popular.”

The piece Oleson found is “nearly identical” to abstract rook pieces dating from later centuries that were found near or in Jordan.

The history of chess dates back around 1,500 years and is thought to have originated in India, although the names and rules have changed several times over the centuries.

Oleson theorized that the spread of chess occurred westward from India along merchant and diplomat routes and that it is “no surprise that early evidence for it should be found at a site on the busy Via Nova Traiana,” which is a Roman road that served as an important trading route.

A significant chunk of Oleson’s work has taken place in or around the Humayma site.

Between 1991 and 2000, he and his team excavated the settlement center over the course of seven field sessions.

In the process, they excavated two farmhouses, a Roman fort, four Byzantine churches, and “a Nabataean campground and three Nabataean and Late Roman houses.” 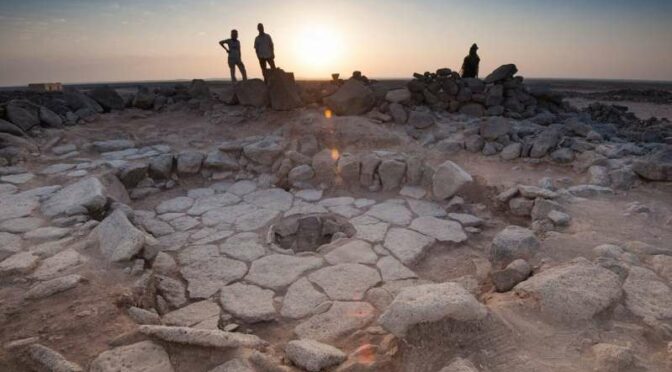 Researchers discovered the charred remains of a flatbread baked by hunter-gatherers 14,400 years ago at an archeological site in northeastern Jordan.

It is the oldest direct evidence of bread found to date, predating the advent of agriculture by at least 4,000 years. The findings suggest that bread production based on wild cereals may have encouraged hunter-gatherers to cultivate cereals, and thus contributed to the agricultural revolution in the Neolithic period.

A team of researchers from the University of Copenhagen, University College London and University of Cambridge have analysed charred food remains from a 14,400-year-old Natufian hunter-gatherer site – a site known as Shubayqa 1 located in the Black Desert in northeastern Jordan.

The results, which are published today in the journal Proceedings of the National Academy of Sciences, provide the earliest empirical evidence for the production of bread:“The presence of 100’s of charred food remains in the fireplaces from Shubayqa 1 is an exceptional find, and it has given us the chance to characterize 14,000-year-old food practices.

The 24 remains analysed in this study show that wild ancestors of domesticated cereals such as barley, einkorn, and oat had been ground, sieved and kneaded prior to cooking.

The remains are very similar to unleavened flatbreads identified at several Neolithic and Roman sites in Europe and Turkey. So we now know that bread-like products were produced long before the development of farming.

The next step is to evaluate if the production and consumption of bread influenced the emergence of plant cultivation and domestication at all,” said University of Copenhagen archaeobotanist Amaia Arranz Otaegui, who is the 1st author of the study.

University of Copenhagen archaeologist Tobias Richter, who led the excavations at Shubayqa 1 in Jordan, explained: “Natufian hunter-gatherers are of particular interest to us because they lived through a transitional period when people became more sedentary and their diet began to change.

Flint sickle blades as well as ground stone tools found at Natufian sites in the Levant have long led archaeologists to suspect that people had begun to exploit plants in a different and perhaps more effective way.

But the flat bread found at Shubayqa 1 is the earliest evidence of bread making recovered so far, and it shows that baking was invented before we had plant cultivation. So this evidence confirms some of our ideas.

Indeed, it may be that the early and extremely time-consuming production of bread based on wild cereals may have been one of the key driving forces behind the later agricultural revolution where wild cereals were cultivated to provide more convenient sources of food.”

Charred remains under the microscope

The charred food remains were analysed with electronic microscopy at a University College London lab by PhD candidate Lara Gonzalez Carratero (UCL Institute of Archaeology), who is an expert on prehistoric bread: “The identification of ‘bread’ or other cereal-based products in archaeology is not straightforward.

There has been a tendency to simplify classification without really testing it against an identification criteria. We have established a new set of criteria to identify flat bread, dough and porridge like products in the archaeological record.

That it was produced before farming methods suggests it was seen as special, and the desire to make more of this special food probably contributed to the decision to begin to cultivate cereals. All of this relies on new methodological developments that allow us to identify the remains of bread from very small charred fragments using high magnification,” said Professor Dorian Fuller (UCL Institute of Archaeology).

A grant recently awarded to the University of Copenhagen team will ensure that research into food making during the transition to the Neolithic will continue: “The Danish Council for Independent Research has recently approved further funding for our work, which will allow us to investigate how people consumed different plants and animals in greater detail.

Building on our research into early bread, this will in the future give us a better idea why certain ingredients were favoured over others and were eventually selected for cultivation,” said Tobias Richter.