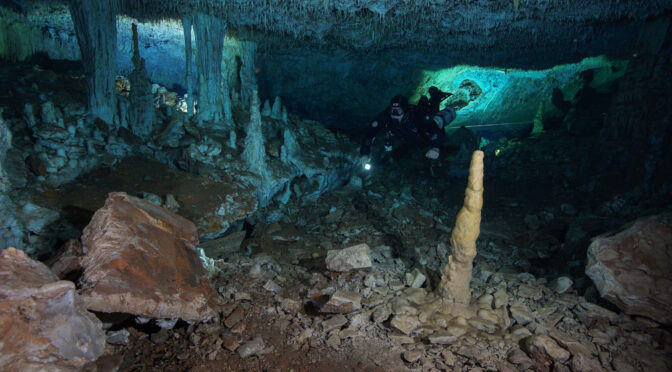 11,000-year-old mine in the underwater cave found by archaeologists

Paleoindian ochre mining has been found by divers in three underwater caves near Akumal, on the coast of the Yucatán Peninsula in Mexico.

From the Maya era, the cave’s were a source of mineral and pigment but they were long preceded by mining activity in this Cave at the end of the latter ice age, 12,000 years ago, and 2000 more. That makes this cave networks the oldest known mine in the Americas.

The cave became submerged with the postglacial rise of sea levels about 8,000 years ago and the saltwater in limestone caves helped preserved the archaeological evidence left by the ancient miners.

Over the course of 100 dives since 2017, underwater archaeologists from the National Institute of Anthropology and History (INAH) divers with the Research Center for the Aquifer System of Quintana Roo (CINDAQ) have explored more than four miles of tunnels and passages in three cave systems.

A recent survey of a half-mile section of passages known as La Mina revealed 155 stacks of stones, tools, charcoal remains of human-set fires on the floor, soot accumulation on the ceiling and most probative of all, pits and trenches carved out of the floor where trace mineral analysis found ocher residue.

Stalactites and stalagmites were deliberately broken to allow people and materials to navigate the narrow passages. The flowstone floor was cracked and shattered to extract the ochre underneath it. Broken stalactite/stalagmites were used as hammerstones. Piles of mine spoil line the walls.

There was a comprehensive mining program, all of it done in the dark areas of the cave. The closest natural light source was at a minimum of 650 feet away, more than 2,000 feet away at the furthest point.

“The cave’s landscape has been noticeably altered, which leads us to believe that prehistoric humans extracted tonnes of ocher from it, maybe having to light fire pits to illuminate the space,” points out Fred Devos.

Until now, no human skeletal remains have been found; however, rudimentary digging tools, signs —that would have been used in order not to get lost— and stacks of stones left behind by this primitive mining activity have been located.

The abundance of ocher filled cavities has led experts to theorize about the rocks themselves being used as tools to excavate and break down the stone.

Iron-rich red ochre was used by humans for tens of thousands of years. The mineral pigment was used in rock art, funerary rituals, pottery decoration, and personal adornment.

In ancient America, ochre has been discovered in art, on human remains, in toolkits, on grinding stones, in tanned hides, and much more. La Mina’s ochre was of particularly high quality, very pure in iron oxide and composed of particles so fine-grained that it was basically ready for use as paint as soon as it was mined.

Skeletal remains have been discovered in other cenotes. The 12,000-year-old skeleton of a teenage girl dubbed Naia found in the cenote of Hoyo Negro near Tulum less than 20 miles southwest of Akumal is the oldest complete human skeleton in the Western Hemisphere.

Naia was a contemporary of the miners who sought ochre in caves 15 miles away from her final resting place.

The discovery that these cave systems were mined for thousands of years opens up the possibility that instead of falling victim to an accident — the going theory as regards Paleoindian remains in cenotes — individuals like Naia may have been scouting caves for valuable ochre.