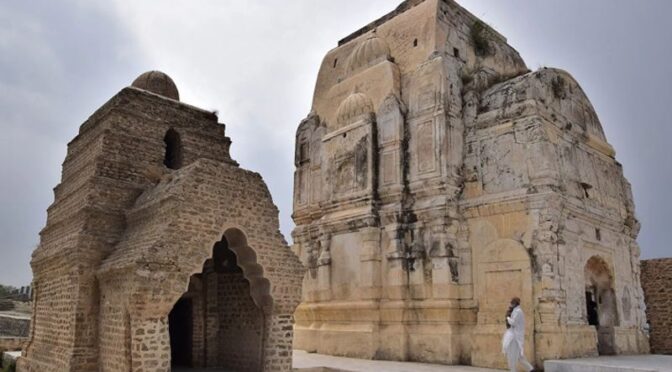 It has been discovered by Pakistani and Italian archaeological experts at a mountain in northwest Pakistan’s Swat district.

According to the reports, the archaeologist excavated a Hindu temple at Barikot Ghundai in Northwest Pakistan. Fazle Khaliq of Khyber Pakhtunkhwa Department of Archaeology said that the temple discovered is of God Vishnu.

The temple is estimated to have been built the Hindus 1,300 years ago during the Hindu Shahi period, the archaeologist said.

The Hindu Shahis of Kabul Shahis, a Hindu dynasty which ruled the Kabul Valley (eastern Afghanistan), Gandhara (modern-day Pakistan), and present-day northwestern India from 850-1026 CE may have built the Hindu temple in the region.

During their excavation, the archaeologists also found traces of cantonment and watchtowers near the temple site.

The archaeologists have also found a water tank near the excavated site, which is believed to be used by the Hindus for bathing before offering their prayers at the temple.

Khaliq further added that Swat district is home to thousand-year-old archaeology sites and the traces of the Hindu Shahi period have been found for the first time in the area. Several Buddhist temples and worship places are also present in the Swat district.

Dr Luka, the head of the Italian archaeological mission, said this was the first temple of the Gandhara civilisation discovered in Swat district.

Only recently, newly discovered Buddha statue in Pakistan was ruined by Islamists

In July 2020, a newly discovered Buddha statue was smashed into pieces by local construction workers and a Muslim cleric on Saturday in Pakistan.

The relic was discovered while digging the foundation for a house in the Pashtun-dominated Khyber Pakhtunkhwa province’s Mardan district in Pakistan.

A video of the act showed the construction workers, along with a Muslim cleric, smashing the Buddha statue using a sledgehammer. They were seen walking over and destroying the life-sized Buddha status while expressing their acrimony against Buddhism, which they consider anti-Islam.

According to reports, the statue was destroyed on the order of a local Muslim cleric, who ruled that it is against Islam. ‘Your nikah would cease to exist and you will no more be a believer if the statue isn’t disposed of’, the cleric told the people at the site, who then followed his orders to destroy the priceless relic, which was accidentally discovered in a good condition.

In July 2020, in a similar incident, the ancient Buddhist rock carvings in the Chilas area of Pakistan-occupied-Kashmir (PoK)’s Gilgit-Baltistan was desecrated by Islamists, who painted Pakistani flag and slogans on the rock-cut art.

According to reports, the incident came to light when the locals of Gilgit-Baltistan posted images on social media platforms. The Islamists had vandalised the rock carvings by writing Islamic slogans on the rock-art that belonged to 800 AD.