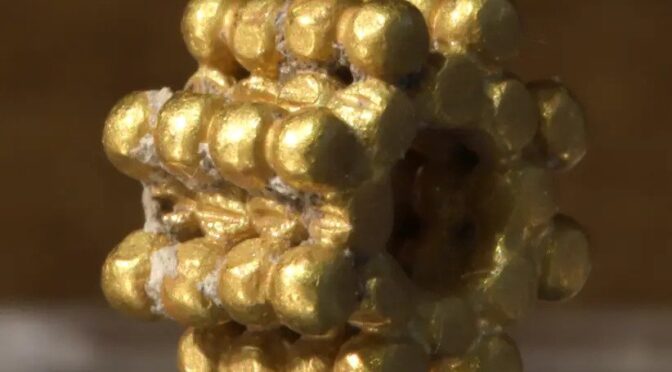 In August, while sifting through the soil with his kin, Binyamin Milt, a resident of Jerusalem, unearthed a perfectly preserved small, flower-shaped cylinder, made of four layers of tiny gold balls, unaware that the item he carried was probably forged around 3,000 years ago.

In fact, the bead was so well preserved that when the boy took the bead to the supervising archaeologist, he initially wrote it off as likely to be an unidentified modern object, not even writing down the boy’s contact information before hurrying back to continue sifting.

It was only while sorting through the summer’s artefacts in Dr Gabriel Barkay’s backyard that he realized the bead was strikingly similar to several similar items he had found when he excavated burial systems from the First Temple period in Katef Hinnom.

While those beads were made of silver, they were identical to the gold bead in both shape and manufacturing method (called granulation).

Similar beads have been found in several other sites across Israel, dated to various periods, with the overwhelming majority dating to the Iron Age (12th to 6th centuries BCE).

Once the bead’s significance had become clear, TMSP researchers called all the families who participated in the sifting on that specific day, until they made contact with Binyamin.

Pieces of gold jewellery are rarely found among archaeological artefacts from the First Temple period since gold at that time was not refined and generally contained a significant percentage of silver.

Granulation is a technique which demands of the goldsmith a considerable amount of expertise and experience, due to the many components and complex manufacturing stages.

The granules are shaped using tiny metal pieces which are melted on a bed of charcoal or charcoal powder, which absorbs air, preventing oxidation.

Once the metal melts, the surface tension of the liquid produces ball-shaped drops. An alternative method involves dripping the liquid metal from a height into a bowl and constantly stirring the drops.

At this stage, it is not yet clear what purpose the bead served, though initial projections by TMSP members say it could have been part of an ornament worn by an important personage who visited the Temple, or by a priest. More info on the piece will be published once all the artefacts from the summer are processed.

TMSP was founded in response to illegal renovations which were carried out in 1999 by the northern branch of the Islamic Movement, disposing of over 9,000 tons of dirt, mixed with invaluable archaeological artefacts, dumping it all into the Kidron Valley.

Archaeologists Dr Gabriel Barkay and Zachi Dvira retrieved the rubble and began sifting through it in 2004, with the goal of understanding the archaeology and history of the Temple Mount, while preserving history.

Over the years, it has grown into an internationally significant project, bringing in over 200,000 volunteers who have helped the researchers find thousands of priceless artefacts.