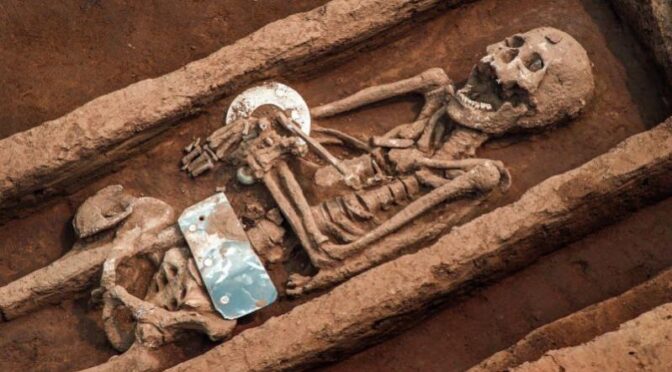 5000-year-old ‘graveyard of giants’ found in a Chinese village

Archaeologists in China have discovered a 5000-year-old graveyard of abnormally tall people who used to live in the country’s Shandong province. The skeletal remains measured over six feet in height.

An archaeological excavation at Jiaojia village in Jinan City’s Zhangqiu District has uncovered 104 houses, 205 graves, and 20 sacrificial pits, according to Xinhua.

Pottery and various objects made with jade were also unearthed during the dig.

The Late Neolithic site uncovered in China dates back to a time when the Yellow River Valley was inhabited by the Longshan Culture, also known as the Black Pottery Culture, which was popular in the region from 3000 to 1900 BC.

The archaeological dig, initiated last year, was led by the University of Shandong.

An analysis of the skeletal remains suggests the ancient people living in the region were unusually tall, Xinhua reported.

The findings said the tallest individual found in the grave was a male who measured 6’3″.

According to prior studies, the Neolithic males typically measure around 5’5″ and the females around 5’1″.

The researchers attributed the unusual height to genetics and environment.

Lead archaeologist Fang Hui, while speaking to Xinhua, said the Late Neolithic civilisation engaged in agriculture, therefore the villagers in the region had access to a variety of nutritious food which could have added to their overall physical growth.

“I suspect that this big game specialisation associated with a surplus of high-quality proteins and low population density created environmental conditions leading to the selection of exceptionally tall males,” said the study’s lead author Pavel Grasgruber in an interview with Seeker.

The tallest of the Longshan men were found in tombs, which the Shandong archaeologists said was because of their higher social status and access to better food.