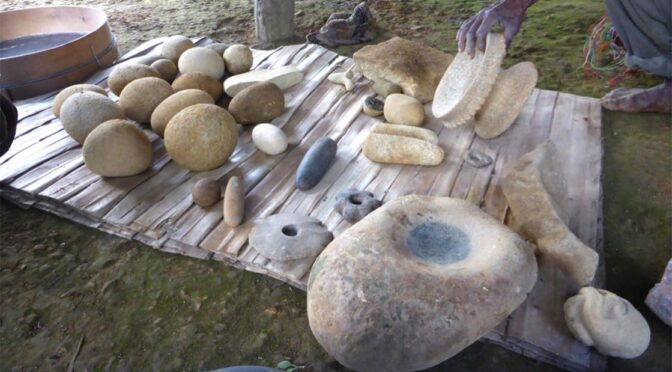 Previously found at ancient Asian and European sites, Now for the first time in New Guinea, the signs of a cultural shift in toolmaking and the lifestyle of farmers found.

Archaeological Dig at a highland site called Waim produced relics of a cultural transition to village life, which played out on the remote island north of Australia around 5,050 to 4,200 years ago.

Archaeologist Ben Shaw of the University of New South Wales in Sydney and colleagues report the findings March 25 in Science Advances.

Agriculture on New Guinea originated in the island’s highlands an estimated 8,000 to 4,000 years ago. But corresponding cultural changes, such as living in villages and making elaborate ritual and symbolic objects, have often been assumed to have emerged only when Lapita farmers from Southeast Asia reached New Guinea around 3,000 years ago.

In Asia and Europe, those cultural changes mark the beginning of the Neolithic period. The new finds suggest that a Neolithic period also independently developed in New Guinea.

Key finds at Waim consist of a piece of a carved human or animal face that probably had a symbolic meaning and two stone pestles bearing traces of yam, fruit and nut starches.

Other discoveries include a stone cutting or chopping tool, a pigment-stained stone with deep incisions that may have been used to apply coloring to plant fibers and an iron-rich rock fragment that was likely struck with other stones to create sparks for igniting fires.

Chemical analysis of an unearthed chunk of obsidian — displaying marks created when someone hammered off sharp flakes — indicates it was imported from an island located at least 800 kilometers away.

These new discoveries are evidence of an ancient island culture, which had developed sophisticated craftsmanship with a range of tools and crafts, that according to the paper had developed “of its own accord in New Guinea.”

Dr. Shaw says that while it has for a long time been argued that social complexity “didn’t come with agriculture in New Guinea,” his new research has identified similar cultural archaeology, evidencing great developments, as is found in Europe and Asia.

The team of researchers is planning to conduct additional excavations around New Guinea to try and find more evidence about the cultural practices that emerged during the transition to agriculture, and maybe even more artifacts pertaining to their complex culture.