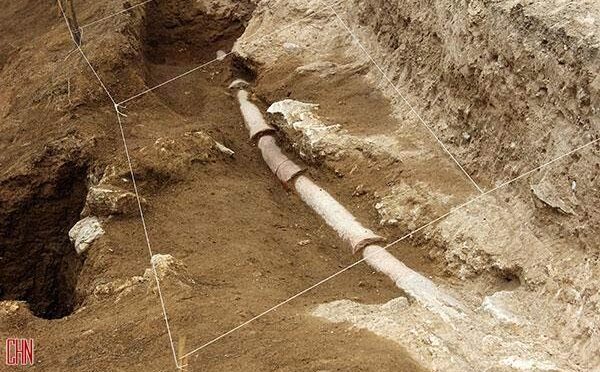 Archaeologists in Iran made an unexpected discovery during excavations at the Farash ancient historical site at the Seimareh Dam reservoir – a 5,000-year-old water system.

The research team is working hard to recover the water pipes, along with hundreds of other artefacts, before they are submerged by the new dam.

The Persians are one of the earliest cultures to implement advanced systems of water distribution and are among the greatest aqueduct builders of the ancient world.

They are particularly well-known for their construction of qanāts, a series of well-like vertical shafts, connected by gently sloping tunnels, which were used to create a reliable supply of water for human settlements and for irrigation.

The water system comprises a small pool and a long earthenware pipeline. Each earthenware conduit measures about one metre in length and the team leader Leili Niaken said it is likely that the structure was made and baked in the region.

In addition to the ancient water pipes, the team of archaeologists from the Iranian Centre for Archaeological Research (ICAR) have also uncovered more than 100 sites dating back to the Neolithic, Bronze Age, Copper Age, Stone Age, Parthian, Sassanid and early Islamic periods. Signs of the Mesopotamians’ influence in the region were identified by studies carried out on the ancient strata at the reservoir.

The archaeological team is now working hard to unearth the rest of the pipeline, which may lead archaeologists to its source.

The aim is to recover as much as possible before it all goes underwater when the filling of the dam is complete.