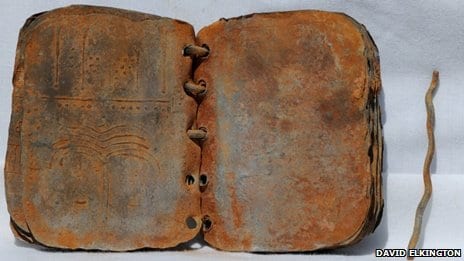 70 Metallic Books That Could Change The Biblical Story

This incredible discovery could prove to be the most important thing since the discovery of the Dead Sea Scrolls. The ancient collection of 70 tiny books bound with wire, could reveal some of the biggest secrets of the early days of Christianity.

As everything that challenged conventional thinking and science, the discovery of these artefacts has caused experts to have divided opinions and to question their authenticity.

Located on these miniature pages are images, symbols and words that seem to refer to the Messiah and, possibly, to the crucifixion and resurrection.

But most importantly, some of the books are sealed, arousing doubts among academics if these could actually be the lost collection of codices mentioned in the Book of Revelations in the Bible.

Dr. Margaret Barker, former president of the Society for the Study of the Old Testament, said:

“The Book of Revelations speaks of sealed books that were only open for the Messiah. There are other texts of the same period of history that speak of great wisdom that has been locked away in sealed books. These contain a secret tradition passed by Jesus to his closest disciples.”

The books were found in a cave situated in a remote part of Jordan known to be a location where Christian refugees fled after the fall of Jerusalem. Other important and authentic documents of the same period have previously been discovered in the area.

Jordanian government officials are in talks at the highest levels to repatriate and safeguard the historical collection. After the discovery by Jordanian Bedouin, this potentially “priceless treasure” was acquired by an Israeli who said he smuggled the books outside the border into Israel, where they remain.

After initial studies, metallurgical testing indicates that some of the books would go back to sometime near the first century after Christ.

Some researchers believe this discovery to be one of the most important findings in history, crucial evidence from the beginning of the Christian era, prior to the writings of St. Paul.

These writings could contain, within their inscriptions, contemporary stories of the final days of Jesus’ life.

David Elkington, a British scholar of ancient religious history and archaeology, and one of the few to examine the books said that might well be:

“the greatest discovery in the history of Christianity.” “It’s exciting to think that we are in the hand’s objects that may have been held by the early saints of the Church,” he added.

Philip Davies, emeritus professor of biblical studies at the University of Sheffield, believes that this is an authentic historical finding.

According to Davies, there is strong evidence that the books have a Christian origin because there are plaques showing a map of the holy city of Jerusalem.

According to Professor Davies, there is a cross in the foreground, and behind it is something which could be interpreted as a grave. The books seem to describe the crucifixion that takes place outside the walls of the city.