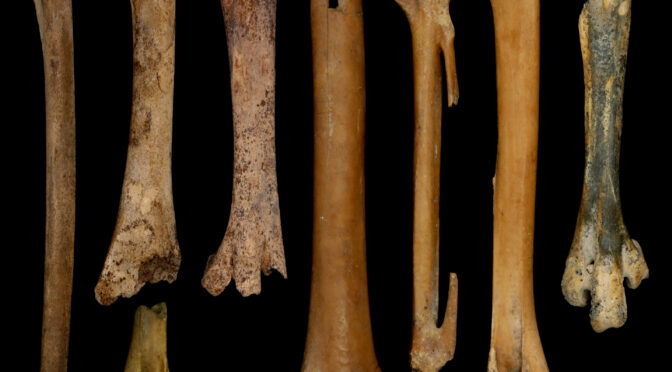 A team of researchers affiliated with multiple institutions in Japan and China has found evidence of goose domestication in China approximately 7,000 years ago.

In their paper published in Proceedings of the National Academy of Sciences, the group describes their study of goose bones found at Tianluoshan—a dig site in east China.

Over the past several years, scientists have debated the timeline of the domestication of birds—most have suggested that chickens, which are believed to have once been a type of junglefowl, were the first to be domesticated, though there is still much debate about when it first occurred.

Estimates have ranged from five to ten thousand years ago. In this new effort, the researchers have found evidence of the domestication of wild geese, as far back as 7,000 years ago.

The team found goose bones at the Tianluoshan site and used radiocarbon dating to find out how old they are.

They have also studied the bones in other ways to learn more about their characteristics, such as the age of the birds at death.

The bones were found at what had once been a settlement of stone-age people who were both hunter/gatherers and farmers—they grew rice to supplement their foraging efforts.

The researchers found 232 goose bones at the site, four of which were from goslings ranging from 8 to 16 weeks old.

They suggest this shows the birds were hatched near the site because it is believed that wild geese did not live in that area at the time the birds were alive.

They also found evidence suggesting that the birds had been locally bred based on chemicals in their bones that likely came from a local water source. And all of the adults were approximately the same size, which indicates captive breeding.

The researchers suggest that the evidence they found provides strong evidence for the domestication of geese in China nearly 7,000 years ago.

A finding that could mean that geese were the first birds to be domesticated.