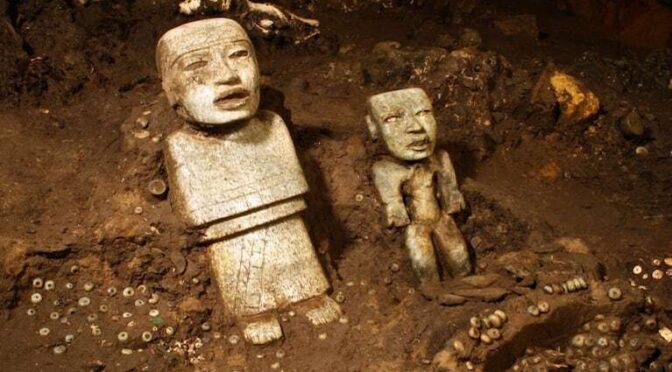 A 2,000-year-old tunnel in the Mexican city of Teotihuacan holds ancient mysteries

Eleven years after discovering a secret tunnel beneath the ancient city of Teotihuacan in Mexico, Researchers uncovered thousands of ritual objects at the feet of what might be a royal tomb.

Guarded by the remains of hundreds of sacrificial bodies, the entrance to the tunnel remained hidden until it was located by radar researchers from the National University of Mexico beneath one of Mexico’s most visited historical sites in 2003.

Before eventually hitting the tunnel entrance in 2010, they spent years preparing the exploration and raising funds. It seemed that the tunnel was closed on purpose by the inhabitants of the city. More than 40 feet below ground, the entrance was covered with rocks.

The tunnel, hundreds of feet long, follows a route of symbols leading to several sealed funeral chambers that may hold the bodies of ancient rulers.

Archaeologists first explored the tunnels, choked with mud and rubble, using a three-foot robot equipped with mechanical arms and a video camera. They then methodically catalogued every bone, seed and shard of pottery as they made their way to the crypts at the end.

“For a long time local and foreign archaeologists have attempted to locate the graves of the rulers of the ancient city, but the search has been fruitless,” archaeologist Sergio Gomez of Mexico’s National Institute of Anthropology and History said in a 2010 press release.

Meanwhile, his team’s excavation of the tunnel suggested they were on the brink of uncovering the long-lost tombs.

“If confirmed, it will be one of the most important archaeological discoveries of the 21st century on a global scale,” he told the Associated Press in 2011.

Discoveries include finely carved stone sculptures, jewellery and shells along with obsidian blades and arrowheads.

They found offerings laid before the entrance of three chambers at the end of the tunnel suggesting these are the tombs of the elite.

So far Gomez’s team has excavated two feet into the chambers. The exploration will continue next year.

The Discovery of tombs may unlock long-held mysteries of a civilization that left no written records of its existence, including how it was governed and whether leadership was hereditary.

“Due to the magnitude of the offerings that we’ve found, it can’t be in any other place,” Gomez said Wednesday. “We’ve been able to confirm all of the hypotheses we’ve made from the beginning.”

At its peak in the middle of the first century, Teotihuacan was the largest city in the Americas with an estimated 200,000 inhabitants.

The Aztecs, who arrived centuries after Teotihuacan had fallen, gave the city its name, which means “birthplace of the gods” in English.