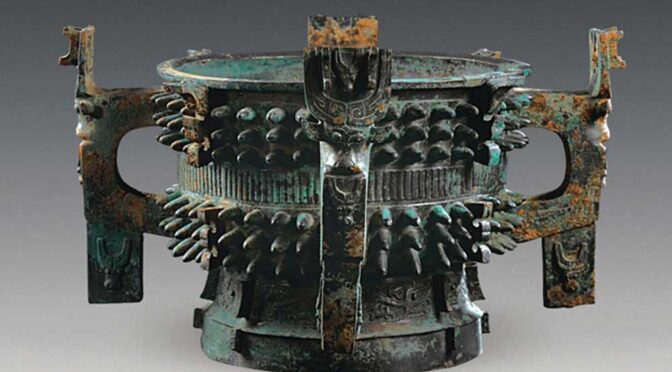 Right on cue for soup season, archaeologists have found a 3,100-year-old tomb lined with what are believed to be bronze soup bowls in Shaanxi province, China, according to Live Science.

All those bowls might have been in service of the decomposed, unidentified corpse archaeologists also found in the tomb.

Along with the bowls and the body, Live Science reports, archaeologists found a “four-handled tureen” decorated with dragons, birds and 192 spikes. There are also a few bovine heads thrown in, for good measure.

“The occupant of Tomb M4 was most likely of elite status, and could potentially be a high-ranking chief or the spouse of a chief,” Live Science reported the translation of the original Chinese journal article as reading.

According to Encyclopedia Britannica, Shaanxi province, where the bowls were found, was the capital of the Zhou dynasty.

M4 was not the only tomb that archaeologist Zhankui Wang’s team found. Fifty-six or more tombs have been uncovered nearby since excavations began in 2012, according to Live Science.

As Live Science reports, the Zhou people of China were warring against the Shang at the time of the burial.

The archaeologists reportedly observed the names of several prominent Shang clans on the vessels they found, suggesting they originally belonged to the Shang.

The archaeologists conjecture that these vessels may have been plundered from the Shang by the Zhou.

“After conquering the Shang dynasty, the Zhou king distributed the plundered war spoils to the military officers with great achievements, and these spoils usually included bronze vessels,” the archaeologists wrote, according to Live Science.

They believe that the vessels may have been plundered during the war for succession.

According to The Encyclopedia Britannica, the Zhou and Shang dynasties co-existed for many years. For years, they alternated between friendly relations and fighting with one another, until one of the major houses of the Zhou created a plan to conquer the lands held by the Shang.

These plans culminated in a battle in the middle of the 11th century B.C., and eventually led to three years of fighting that resulted in the Zhou conquering all of China.

The Zhou was the longest-ruling of China’s dynasties, ranging from between approximately 1046 to 256 B.C, according to Columbia University.

The Shang dynasty, though not as long-lived, provided archaeologists with some of the earliest examples of Chinese bronze work, according to Encyclopedia Britannica