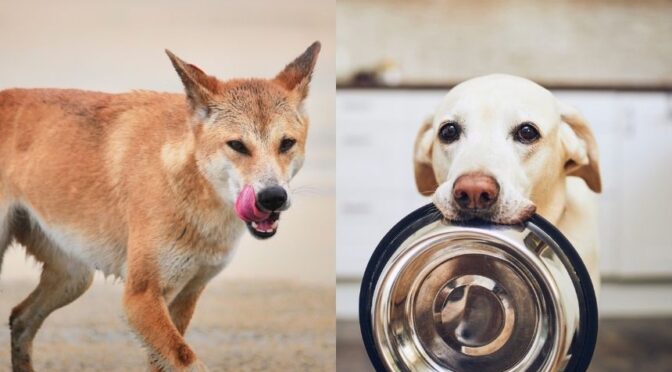 The shape of the mandible (the lower jaw) is influenced by the mechanical action of the jaw muscles that connect it to the skull, and the mandible shape, therefore, reflects the diet of the animal.

The lower jaw is also sufficiently robust to survive burial and fossilization, providing valuable insight into the diets of animals that are long dead.

A new international study published in Proceedings of the Royal Society B: Biological Sciences has described the shape of 525 ancient dog mandibles from European archaeological sites.

The study compared these 5,000–10,000-year-old remains to a reference sample of modern dogs, wolves, as well as our Australian dingoes.

“Ancient dogs are physically distinctive from those of modern dogs, with the main differences in the curvature of the body under the carnassial (cutting) tooth, suggesting they fed on more tough and hard foods than most modern dogs,” said Dr. Colline Brassard, lead author of the study.

Modern dogs have an omnivorous diet. They have multiple copies of the amylase gene that increases their ability to digest starch—the carbohydrate found in plants such as grains—a trait that has been interpreted as reflecting their living alongside humans and consuming anthropogenic-sourced foods.

Dr. Brassard said it is likely that a shift from a carnivorous diet to the starch-containing omnivorous diet of modern domesticated dogs could explain the changes evident in their jaw shape.

“Somewhat surprisingly, the shape of dingo mandibles did not group with ancient dogs but was instead intermediate between wolves and modern dogs.

The ancient dogs also showed traits indicating they had a greater bite force than modern dogs, which would also have been useful for defence or hunting,” said Professor Trish Fleming, from Murdoch University, who collaborated on the work, comparing European ancient dogs with dingoes.

The dingo was brought to Australia somewhere about 3,600 to 5,000 years ago and it has lived in isolation until about 200 years ago when Europeans brought modern dogs onto the continent.

Dingoes have a carnivorous diet, with their principal diet being kangaroos and wallabies, and they have recently been shown to have a single copy of the amylase gene, supporting their separation from modern dog lineage prior to this adaptation to an omnivorous diet.