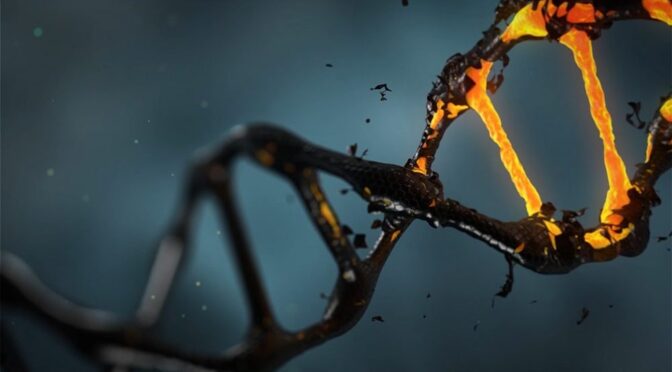 All Humans May Be Descended From a Pair That Lived 200,000 Years Ago Imply Experts

According to a recent review, all modern humans may have descended from a single couple that lived 100,000 to 200,000 years ago. Scientists surveyed the genetic ‘bar codes’ of five million animals – including humans – from 100,000 different species and the results have prompted speculation that we sprang from a single pair of adults after a catastrophic event almost wiped out the human race.

These bar codes, or snippets of DNA that reside outside the nuclei of living cells, suggest that it’s not just people who could have come from a single pair of beings, but nine out of every 10 animal species, too.

Stoeckle and Thaler, the scientists who headed the study, concluded that ninety per cent of all animal species alive today come from parents that all began giving birth at roughly the same time, less than 250 thousand years ago – throwing into doubt the patterns of human evolution.

‘This conclusion is very surprising,’ Thaler admitted, ‘and I fought against it as hard as I could.’

They mined ‘big data’ insights from the world’s fast-growing genetic databases and reviewed a large literature in evolutionary theory, including Darwin.

Dr Stoeckle said: ‘At a time when humans place so much emphasis on individual and group differences, maybe we should spend more time on the ways in which we resemble one another and the rest of the animal kingdom.’

The conclusions throw up the considerable mystery as to why the need for human life to start again was needed such a relatively short time ago, especially since the last known extinction we know of was during the time of the dinosaurs 65 million years ago.

This opens up the possibility of an inbuilt human evolutionary process wherein we break down and die out, leaving the need to start from scratch. We’re also surprisingly similar to not just every other human, but every other species.

‘If a Martian landed on Earth and met a flock of pigeons and a crowd of humans, one would not seem more diverse than the other according to the basic measure of mitochondrial DNA,’ said Jesse Ausubel, Director of the Program for the Human Environment at The Rockefeller University.

‘Culture, life experience and other things can make people very different but in terms of basic biology, we’re like the birds,’ Dr Stoeckle added.

The ‘mitochondrial DNA’ examined in the research is that which mothers pass down from generation to generation and it showed the ‘absence of human exceptionalism.’

‘One might have thought that, due to their high population numbers and wide geographic distribution, humans might have led to greater genetic diversity than other animal species,’ added Stoeckle.

‘At least for mitochondrial DNA, humans turn out to be low to average in genetic diversity.’

The study has been misunderstood by some religious parties who thought it meant that we all came into being in some seminal Big Bang-typed event 100,000 ago, but this isn’t what the findings actually suggest.

What Stoeckle and Thaler’s findings point to is that our species has to revamp far more often than we thought, and we do so in unison with all animals. Since the publication of this article, we have been contacted by Drs. Stoeckle and Thaler have made the following statement:

‘Our study is grounded in and strongly supports Darwinian evolution, including the understanding all life has evolved from a common biological origin over several billion years.