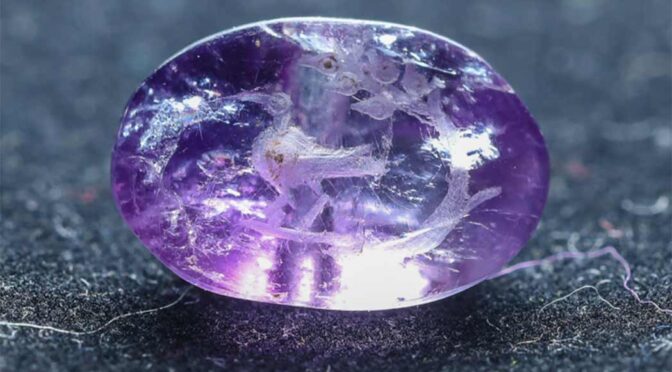 Archaeologists working in the Old City of Jerusalem have discovered an ancient seal carved out of amethyst, which may show the biblical persimmon plant, one of the ingredients in the incense offered in the ancient Temple in Jerusalem.

Until now we had not known what that looked like. We may still not, but that is what the archaeologists excavating the site think the seal may show.

Also known as bosem, balsam, or the “Balm of Gilead,” the plant is not related to the orange persimmon fruit that we are familiar with today. It was used during the Second Temple period in the production of expensive perfumes, medicines and ointments, the Israel Antiquities Authority said.

“If it is indeed the famous and expensive biblical persimmon, then it is likely that the seal owner was a Jew with means since the production and trade that took place around the persimmon plant was tightly controlled at the time by Jews living in the Dead Sea basin, where the fruit was grown,” said Prof. Shua Amorai-Stark, the co-author of an upcoming paper on the find.

The seal also bears the image of a bird, which may be a dove, she says. “The dove is also a positive motif in the Hellenistic, Roman, and Jewish world. It symbolizes wealth, happiness, goodness and success,” said Prof. Shua Amorai-Stark, the co-author of an upcoming paper on the find.

Or, judging by the shape of its beak, perhaps the seal shows an ibis, a bird the ancient Egyptians associated with the god Thoth, who among other things, judged the dead.

While thought to be about 2,000 years old, the seal’s dating cannot be categorical but the use of gems and semi-precious stones, not only in jewellery but in seals, was relatively common in the late Second Temple period. Its location is also telling.

The amethyst seal was found at the Emek Tzurim National Park, operated by the City of David Foundation, where soil from Israel Antiquities Authority excavations conducted along the foundation stones of the Western Wall was being sifted.

The City of David Foundation says it had been in a drainage system along the street connecting the Siloam pool and the Temple Mount, which at the time housed the Second Temple, erected by King Herod, though some believe he didn’t live to finish the job.

Supporting the notion that the amethyst seal shows biblical persimmon, some Biblical commentators believe that King Solomon gifted the precious plant to the Queen of Sheba, the IAA points out, adding that the ancient Jewish historian Flavius Josephus wrote that Mark Antony presented persimmon orchards that formerly belonged to King Herod, to his beloved, Cleopatra.

READ ALSO: ARCHAEOLOGISTS FIND A 2,700-YEAR-OLD TOILET IN A LUXURIOUS PALACE IN JERUSALEM

“This is an important find because it may be the first time a seal has been discovered in the entire world with an engraving of the precious and famous plant, which until now we could only read about in historical descriptions,” archaeologist Eli Shukron, who conducted the excavation at the foundations of the Western Wall on behalf of the Israel Antiquities Authority and the City of David, said in a statement.

“The research that takes place around the finds allows us to get a glimpse into the daily lives of the people who lived in the days of the Second Temple, the glory days of Jerusalem.”

Other seals made of gems or semi-precious stones like amethyst have been found in Jerusalem. Just months ago archaeologists excavating the so-called City of David just south of the Temple Mount found a gem carved with the face of Apollo. That was also tentatively dated to about 2,000 years ago, the Second Temple period, and was also discovered in the ancient Jerusalem sewer system. The god’s image was shown featuring flowing long hair, a small but firm chin and a large nose.