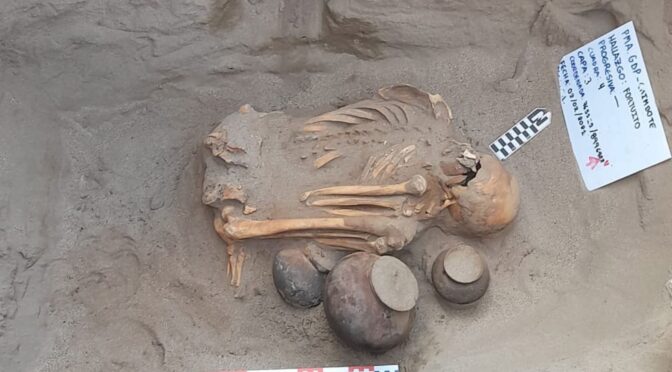 An unusual pre-Hispanic chimú burial was discovered in Peru

In an archaeological discovery in Peru, a pre-Hispanic burial belonging to the Chimu Culture was discovered on Wednesday by government workers who carried out domestic gas connection works very close to an urban area in the city of Chimbote, in the Ancash district.

Juan Lopez Marchena, head of the Decentralized Culture Directorate (DDC) of Chimbote, clarified that the skeletal remains belonged to an individual who was found in a flexed ventral ulna position along with three vessels.

“Following the studies and analyses, we will be able to know part of the pre-Hispanic history of the people at that time, the gender of the individual, the diet, the occupation, as well as information about the vessels associated with the find,” he told Andina news agency.

According to Lopez, the vessels were apparently destined for domestic use, and —on the inside— there was evidence of the presence of piruros, which the Chimu women used to spin wool.

“The vessels feature characteristic circles of the Chimu Culture, which settled mainly in Casma,” he mentioned.

These discoveries are important for this reason, he said, because “we are building a cultural sequence.”

“Two finds have been reported, and they are very important because they indicate how rich and millenary different peoples in Chimbote can be,” he stressed.

The remains will be taken to the Max Uhle Museum, located in the city of Casma. They will be analyzed, and the results will be significant for the investigation of pre-Hispanic Peru.

Mass-Murder Under The Silvery Light Of The Moon

One aspect of the Chimú culture, which the Spanish conquistadors couldn’t forgive, was the mass-sacrifice of captive adult warriors at the Temple of the Moon, just a few miles from Chan Chan. However, this was way less horrific than the Chimú elite’s institutionalized killing of babies and children.

In a 2019 National Geographic article Dr. Gabriel Prieto, a professor of archaeology from the National University of Trujillo, discussed a shocking discovery in Huanchaquito, a hamlet on the north coast of Peru.

In 2011 he discovered the broken bodies of “269 children between the ages of five and 14.” More than 500 years ago these children were systematically murdered in “carefully orchestrated acts of a ritual sacrifice that may be unprecedented in world history,” said Dr. Preito.

Chan Chan’s sustained success depended on carefully managed irrigation systems and coastal fisheries. This means a severe El Niño weather event might have shaken the political and economic stability of the Chimú kingdom.

It is thought that the priests and leaders may have ordered the mass sacrifice of these children in a desperate attempt to persuade the gods to stop the rains and flooding caused by an El Niño.

Jane Eva Baxter, an anthropology professor at DePaul University, said the Chimú people probably considered their children as the most valuable offerings they could present to the gods and Dr. Prieto said this number of children (269) would have been “a massive investment on behalf of the state”.