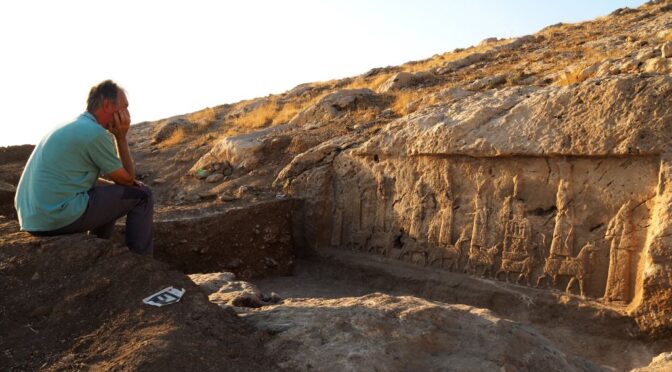 Ancient Assyrian reliefs of a king in a procession of gods and goddesses riding on animals and mythical creatures have been uncovered by archaeologists.

The Assyrian carvings are nearly 3,000 years old and were discovered late last year by Italian and Iraqi archaeologists excavating in the district of Faida, south of Duhok city, about 300 miles (480 kilometers) north of Baghdad, in the region of Kurdistan in northern Iraq.

Dr. Daniele Morandi Bonacossi, from the Italian University of Udine and with the help of archaeologists from the Department of Antiquities, is responsible for the land of Nineveh Archeological Project.

According to the university’s excavation chief at Faida, with the exception of the carvings at the archaeological site of Khinnis discovered near the city of Mosul in 1845, there exists “no other” comparable Assyrian rock art.

Dating back about 2,800 years ago, the story of Assyrian King Sargon II on both sides of a procession of the seven major Assyrian gods and goddesses was cut off from the rocks in relief over an ancient irrigation canal in a time of expanding in the Assyrian Empire.

All gods and goddesses are riding animals and mythical creatures, including horses, bulls, lions, and dragons, each facing the direction that the water once flowed under them into the ancient canal.

According to an article in Live Science, Dr. Morandi Bonacossi said the carving feature: the sun god Shamash on a horse and the moon god Sin is on the back of a horned lion. Furthermore, the god of wisdom is mounted on a dragon, while the weather god is on a horned lion and a bull.

Ishtar, the goddess of love and war sits on a lion and Ashur, the chief Assyrian god, is perched upon a dragon and a horned lion, while his wife Mullissu sits on a decorated throne supported by a lion.

The famous Assyrian king Sargon ruled from 722 BC until 705 BC and according to the Hebrew Bible, he invaded and defeated the  Kingdom of Israel. It was under his rule that the canal had been built for local irrigation.

His son and successor, Sennacherib, ruled until 681 BC and rebuilt the ancient city of Nineveh alongside the Tigris River, on the outskirts of modern Mosul. He integrated his father’s canal into a much more expansive irrigation network that transformed the Assyrian Empire into an agricultural giant.

In a National Geographic article about the new discovery, Hassan Ahmed Qasim Duhok from the Directorate of Antiquities said the carvings were first seen in 1973 by a British team who noted the tops of three stone panels but tensions between Kurds and the Baathist regime in Baghdad prevented further work.

Then, in 2012, Dr. Morandi Bonacossi identified six more reliefs but all archaeological work was abandoned in 2014 when ISIS captured nearby Mosul. However, a full scientific excavation resumed in 2017 after the terrorist organization was finally driven out of the region.

You would think such an incredible discovery would more than satisfy archaeologists, but it only seems to have peeked their exploratory natures, as they now suspect more might lie beneath. Dr. Morandi Bonacossi told Live Science that the 4-mile-long (6.5 km) canal, which once carried water to farmland in the Faida district during the eighth century BC, had been filled in a long time ago.

However, the archaeologist says it’s “highly probable” that more reliefs and maybe monumental celebratory cuneiform inscriptions are still buried under the soil debris that filled the canal, waiting to be uncovered.

The Faida archaeological site has traditionally been the focus of vandalism and looting caused by rapid and urban expansion, including the construction of a modern aqueduct nearby, which now threatens the site, according to Dr. Morandi Bonacoss.

However, Faida is currently undergoing a major salvage and restoration project, and a new archaeological park is being created nearby, which will help protect the site from further incursions.