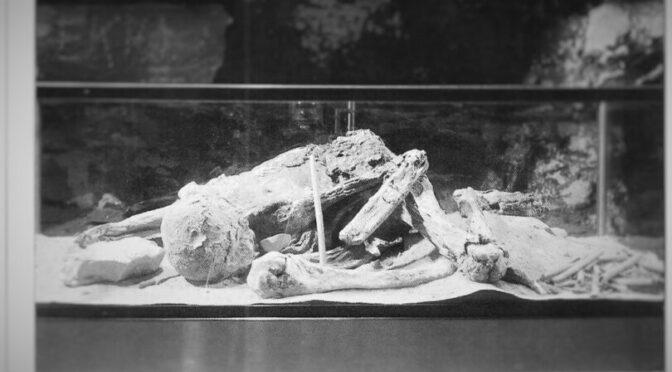 This fascinating mummy was found over 200 years ago in one of the largest cave systems in America: The Mammoth Cave. There, miners discovered an extremely well-preserved mummy with red hair prepared and embalmed in an eerily similar way to the ancient Egyptians.

After examining the mummy in the late 1800s, the Smithsonian Institute ‘lost’ the mummy. Some 200 years ago, a very unusual mummy was discovered in Mammoth Cave, Kentucky.

There are a couple of things about the mummy which completely challenge what we have been taught to believe about history books, especially about the ability and accomplishments of the Ancient Egyptians, their intrepid transoceanic voyages and their influence on other ancient cultures.

The mummy known as Fawn Hoof is considered by many as evidence that history books are wrong and that we are being given filtered information when it comes to ancient civilizations and the origins of mankind.

The mummy was mentioned in the book Prehistoric Mummies from the Mammoth Cave Area, by Angelo I. George where the author indicates that the mummy was found in the cave in September of 1811. According to George, the Ancient mummy was given the name “Fawn Hoof” in 1815 and ‘thousands’ of people saw the mummy as it was put on display.

But what’s the story behind the mummy and why is it so important?

Sometime between Between 1811 and 1813 (different authors vary on the date, a group of miners were working inside one of the Kentucky caves known as Short Cave.

One of the workers, who was excavating, came across a hard surface which proved to be a large rock with a flat surface. After miners had removed the rock they discovered a crypt that contained a mummy inside. But it wasn’t an ordinary mummy. In the past, such discoveries were not given much importance and people looked to make a profit out of history.

Years went by and the collection purchased by Ward was placed in a travelling exhibition of rarities. Through the years, the Fawn Hoof Mummy travelled across the country. It was first taken to Lexington, Kentucky and later transferred to the American Antiquarian Society.

In 1876 the Fawn Hoof Mummy was transferred to the Smithsonian Institution by Isaiah Thomas, founder of the American Antiquarian Society. Due to the fact that the mummy was inadequately cared for and because it was transported a lot, the mummy suffered damage.

Researchers at the Smithsonian examined the mummy, dissected it and reported their findings.

At some point after that – like many other things that challenge history — the Fawn Hoof Mummy was completely lost.

According to initial reports, the mummy was found to have been a woman of around six feet in height.

The mummy was wrapped in deerskin, which in turn was decorated with leaf and vine patterns. The mummy was found to be in an extremely well-preserved condition even though the mummy was not analyzed by researchers for over 60 years after it was initially found.

Among the more unusual finding was the fact that this mummy-like other mummies found in Peru and Bolivia in recent times — had red hair.

It was concluded that the hair was cut to a length of an eighth of an inch, except for the back of the mummy’s head where the hair was about two inches long. Based on the artefacts found where the mummy was buried, it is believed that the woman was of great importance in ancient times.

However, researchers noted that among the most fascinating details about the Fawn Hoof Mummy is the fact that it was prepared and embalmed in an eerily similar way as the ancient Egyptians used to.

Reports indicate that the hands, ears, fingers, and the rest of the body were dried, but extremely well preserved.

Many people believe that the Fawn Hoof Mummy is one of the many indicators which prove that thousands of years ago, before written history, ancient cultures around the globe were intricately connected and that transoceanic voyages occurred much sooner than mainstream scholars are willing to accept.