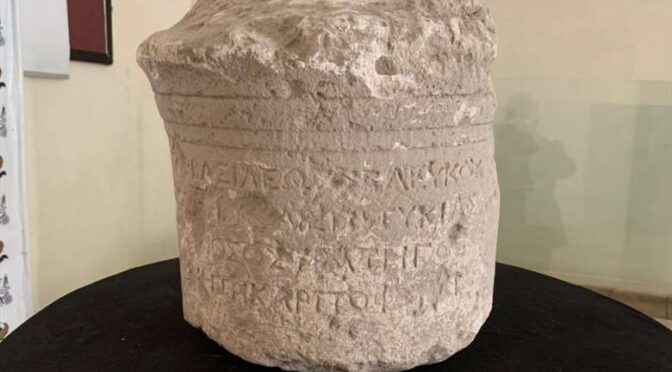 The Department of Antiquities in Kurdistan Region’s Duhok province announced on Monday the discovery of an ancient artefact that dates back over 2,000 years.

Kurdistan 24 reports that an engraved tablet has been unearthed in northern Kurdistan’s Duhok province. “After careful study, we found out that the stone tablet is engraved with Hellenistic script and dates back to 165 B.C.

Experts in Duhok found the item back in March but only estimated that its age recently.

The Hellenistic era is a period in history that followed the death of Alexander the Great in 323 BC, who conquered much of the Middle East and spread Greek influence.

Ahmed explained that the engravings had been translated into Kurdish by researchers, who also concluded that the inscriptions refer specifically to Demetrius— a Hellenistic-era ruler of the region around the second century B.C.

The writing makes references to the period that followed the coming of Alexander the Great, he noted.

“This discovery will pave the way for researchers to conduct further archaeological investigations in the foreseeable future [in the Kurdistan Region],” said Ahmed.

The research findings will be published in academic journals, according to the museum official.

Ahmed’s statement comes after the Kurdistan Region Ministry of Municipalities and Tourism on Monday announced it had unearthed a number of historic sites in Erbil province.