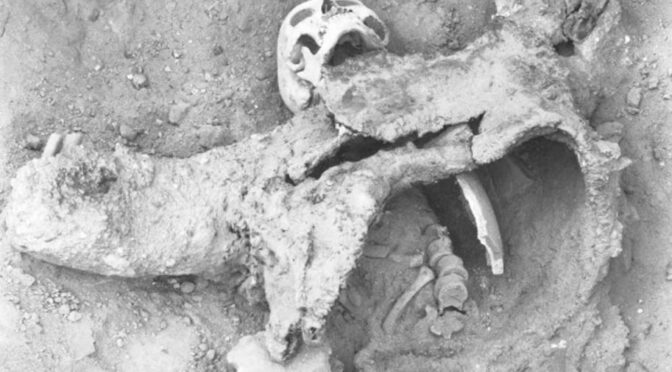 Simon James presented CSI-style claims that approximately 20 Roman soldiers discovered in the mine in the town of Dura-Europos in Syria had died, not because of a sword or a spear, but because of asphyxia, said at the conference of the Archeological Institute of America.

The Romans who set up a large garrison conquered Dura-Europos on the Euphrates. The city was vigorously attacked by an army from the powerful new Sasanian Persian Empire around 256 AD.

The dramatic story is told entirely from archaeological remains; no ancient text describes it. Excavations during the 1920s-30s, renewed in recent years, have resulted in spectacular and gruesome discoveries.

The Sasanians used the full range of ancient siege techniques to break into the city, including mining operations to breach the walls. Roman defenders responded with ‘counter-mines’ to thwart the attackers.

In one of these narrow, low galleries, a pile of bodies, representing about twenty Roman soldiers still with their arms, was found in the 1930s.

While also conducting new fieldwork at the site, James has recently reappraised this coldest of cold-case ‘crime scenes’, in an attempt to understand exactly how these Romans died, and came to be lying where they were found.

Dr James, Reader in the School of Archaeology and Ancient History at the University of Leicester, said: “It is evident that, when mine and countermine met, the Romans lost the ensuing struggle.

Careful analysis of the disposition of the corpses shows they had been stacked at the mouth of the countermine by the Persians, using their victims to create a wall of bodies and shields, keeping Roman counterattack at bay while they set fire to the countermine, collapsing it, allowing the Persians to resume sapping the walls.

This explains why the bodies where they were found. But how did they die? For the Persians to kill twenty men in a space less than 2m high or wide, and about 11m long, required superhuman combat powers-or something more insidious.”

Finds from the Roman tunnel revealed that the Persians used bitumen and sulphur crystals to get it burning. These provided the vital clue. When ignited, such materials give off dense clouds of choking gases, which could prove to be deadly to anyone that comes into contact with it. This is why such dangerous and hazardous chemicals are now stored away in cages like those you can find at Storemasta to help protect the health of the people. Of course, in those days, it is very unlikely that these types of things existed.

“The Persians will have heard the Romans tunnelling,” says James, “and prepared a nasty surprise for them. I think the Sasanians placed braziers and bellows in their gallery, and when the Romans broke through, added the chemicals and pumped choking clouds into the Roman tunnel.

The Roman assault party were unconscious in seconds, dead in minutes. Use of such smoke generators in siege-mines is actually mentioned in classical texts, and it is clear from the archaeological evidence at Dura that the Sasanian Persians were as knowledgeable in siege warfare as the Romans; they surely knew of this grim tactic.”

Ironically, this Persian mine failed to bring the walls down, but it is clear that the Sasanians somehow broke into the city. James recently excavated a ‘machine-gun belt’, a row of catapult bolts, ready to use by the wall of the Roman camp inside the city, representing the last stand of the garrison during the final street fighting.

The defenders and inhabitants were slaughtered or deported to Persia, the city abandoned forever, leaving its gruesome secrets undisturbed until modern archaeological research began to reveal them.