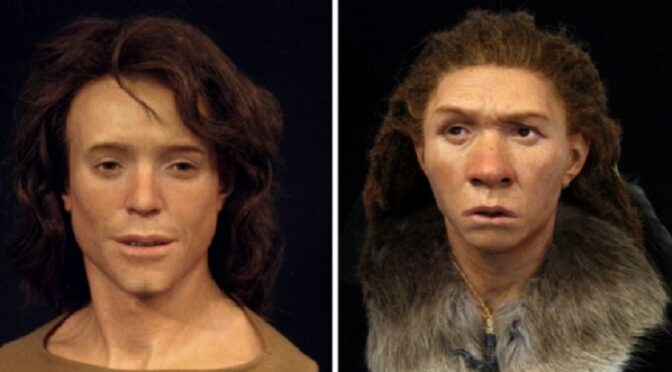 Such works by Oscar Nilsson represent the faces of people who died in the past. The Swedish archeologist is also a sculptor who focuses on reconstructing the faces of those whose graves were found during excavation.

In 1996, he began his own company, O. D. Nilsson, and has worked with a number of museums throughout the country.

“There is a motif in the human face that always fascinates me: the variation of the underlying structure as well as the variety in details seem endless. And all the faces I reconstruct are unique. They are all individuals.”

Found in Brighton (United Kingdom), this young woman was probably about 20 years old when she died.

A baby was placed on her chest, so her death may have been caused by complicated labor. While her DNA was not well-preserved, it is possible that people who lived in England had a dark skin tone.

During an excavation in Gibraltar in 1848, the remains of a female Neanderthal was found. Nilsson made her sculpture similar to humans as they share 2-4% similarities in DNA to Europeans.

Found in 2012, this is Huarmey Queen who was found in a tomb along with 57 other noblewomen. Particularly interesting is the fact that they were all buried extravagantly with jewelry by Huarmey Queen was clearly more than the others.

Weaving tools made of gold were found along with her body, gold ear flares, a silver goblet, and a copper ceremonial axe. It was later found out that she was a renowned weaver.

The process of textile production was so complicated that it was valued more than gold or silver.

Avgi was 18 years old, your typical teenager from 9,000 years ago in the land of Greece. She lived when technological evolution began changing the way people hunt and gather.

This old woman is Estrid who possibly died at the age of about 80 years. She lived near Stockholm in Taby and her husband is presumed to have died during Byzantium time. To have lived up to 80 years of age is incredible when Viking’s life expectancy then was only 35. She was also involved in the infrastructure development of the land she lives in.

This young man is dubbed Adelaziy Elbakhusom (Adelasius Ebalchus) and was found in the land of Switzerland.

He is probably from the eighth century AD and may have died from malnutrition and chronic infections. Despite that, he had beautiful arrays of teeth.

This Viking died at the age of 45, a relatively normal age expectancy for Vikings. Presumed to be a Swedish Viking, this man lived during the 6th century and the features you see are based on the DNA recollection from his remains.

The relatively young and healthy man died at the age of 45. He lived during the Saxon era and based on his healthy and strong bones, he might have suffered from abscesses as he lost a lot of teeth. He may also have been a soldier.

10. British Man during the Iron Age.

This man may have lived in 2,400 years ago and had healthy bones structure.

He died at about 24-31 years of age and has diastema, or shcherbinka, which is space between teeth. His hair is of Germanic hairstyle which is called “Swabian knot”.

She may have been engaged in heavy labor and nails were found in her coffin which may have meant something for the people of that time. Other coffins are also found with nails in them, but it may have been caused by closing the coffin. She may have died at about the age of 25-35.

According to Nilsson: He may not be that medieval after all. C14-results indicates that he is from somewhere during the period of 1470-1630. However, analysis of his skeleton shows that he suffered from so-called os acromiale, a defect in the bones of the shoulder with a clear connection to heavy use of longbow-shooting! So, maybe it is possible to narrow the time span to 1470-1540, as longbows gradually fell out of fashion to use during the mid 16th century.

This man may have suffered from malnutrition and iron deficiency anemia and died at the age of 25-35 about 3,700 years ago.