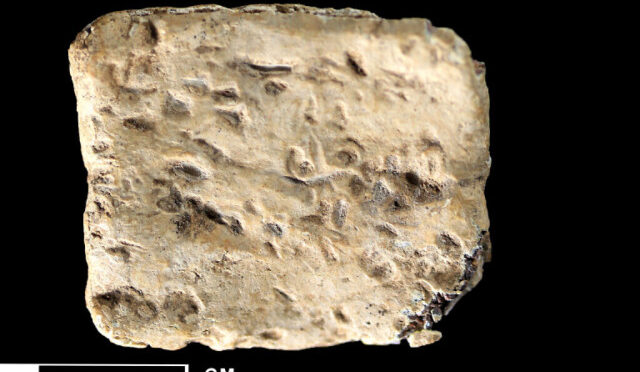 Archaeologist Dr. Scott Stripling and a team of international scholars held a press conference on Thursday in Houston, Texas, unveiling what he claims is the earliest proto-alphabetic Hebrew text — including the name of God, “YHWH” — ever discovered in ancient Israel. It was found at Mount Ebal, known from Deuteronomy 11:29 as a place of curses.

If the Late Bronze Age (circa 1200 BCE) date is verified, this tiny, 2-centimeter x 2 centimeter folded-lead “curse tablet” may be one of the greatest archaeological discoveries ever. It would be the first attested use of the name of God in the Land of Israel and would set the clock back on proven Israelite literacy by several centuries — showing that the Israelites were literate when they entered the Holy Land, and therefore could have written the Bible as some of the events it documents took place.

“This is a text you find only every 1,000 years,” Haifa University Prof. Gershon Galil told The Times of Israel on Thursday. Galil helped decipher the hidden internal text of the folded lead tablet based on high-tech scans carried out in Prague at the Academy of Sciences of the Czech Republic.

Based on epigraphical analysis of the scans and lead analysis of the artifact, Stripling and his team date the curse tablet (or defixio) to the late Bronze Age, before or around 1200 BCE. If this dating is verified, it would make the text centuries older than the previous recordholder for oldest Hebrew text in Israel and 500 years older than the previously attested use of the tetragrammaton YHWH, according to Galil. Writing in a similar alphabet was discovered in the Sinai Peninsula dating to the beginning of the 16th century BCE.

However, the researchers have not yet published the find in a peer-reviewed academic journal. Likewise, they are not yet releasing clear images and scans of the inscription for other academics to weigh in on.

Also challenging the secure dating of the object is the fact that the tablet was not discovered during a carefully excavated stratified context. Rather, it was found during a 2019 re-examination of earth from a dump pile formed during 1980s excavations at Mount Ebal that were held under Prof. Adam Zertal. The earth had been dry-sifted then, and in 2019 Stripling’s team resifted it using a wet sifting technique that was developed at the Temple Mount Sifting Project, where Stripling once worked. Stripling current heads ongoing excavations at biblical Shiloh.

Archaeologists approached by The Times of Israel were unwilling to comment on the record until they viewed the hopefully forthcoming academic paper and scans.

“The fact that they are publishing it in the news before being published scientifically is a bit off,” said one established academic. Another cautioned that since he hasn’t been able to view the inscription himself, it was impossible to know whether the claims were factual or a case of “overdeveloped imagination.”

However, both skeptics said that “everything is possible” and that “it may be valid,” even though the images were not yet being made available. While it is irregular to promote an unpublished work in the lay press before an academic journal, Galil noted that the team felt obligated to share news of the tablet’s existence and their initial findings because of its history-changing potential.

A curse tablet from the mount of curses

The curse tablet was discovered in earth originally taken from a cultic site at Mount Ebal, near biblical Shechem and today’s Nablus. Mount Ebal appears in Deuteronomy 11:29 as a place of “curses” and is revered by some Christians and Jews as the place where the biblical Joshua built an altar as commanded in Deuteronomy 27. It is described in Joshua 8:31 as “an altar of unhewn stones, upon which no man had lifted up any iron.”

The site known is known by locals as “Al-Burnat,” or “top hat” in Arabic, and is regarded by archaeologists as an exceedingly rare and significant illustration of early Israelite settlement. It is the only one of its type in the area. A consensus of archaeologists date the clearly cultic site to the early Iron Age, somewhere around the 11th century BCE, or when the Israelites evidently began to settle the land of Canaan. Other archaeologists push that date back to the 12th century or Late Bronze Age.

“This is an important site, belonging to the wave of settlement in the highlands in the early phase of the Iron Age,” said Prof. Israel Finkelstein, one of the world’s leading researchers on Iron Age settlement in the region. Finkelstein spoke with The Times of Israel in February 2021 when Mount Ebal was in the news after allegations were made that it was being destroyed by local Arab towns in the course of construction of a road.

“As far as I can judge, it dates to the 11th century BCE. As such, it can be understood as representing the groups which established the kingdom of Israel (the Northern Kingdom) in the 10th century BCE. In other words, it is an early Israelite site,” he told The Times of Israel.

The late University of Haifa professor Zertal excavated the site in the 1980s, including a large rectangular altar that was apparently constructed over an earlier round altar. Stripling said the tablet came from earth originally excavated from this round altar.

“As soon as I saw it [the tablet], I knew what it was because these curse tablets are known. My heart almost jumped out of my chest,” said Stripling.

In addition to the fact of an early — if not the earliest — Hebrew inscription found in the Land of Israel, Galil told The Times of Israel that this find sets to rest the ongoing academic discussion of whether the Israelites were literate.

“We know that from the moment they came to Israel, the Israelites knew how to write, including the name of God, clearly,” said Galil. “It’s not too surprising; people already knew how to write in other places,” he added.

The scans were read by Galil and Pieter Gert van der Veen of Johannes Gutenberg-Universität Mainz. Speaking with The Times of Israel, Stripling said the reading includes the words “arur” (cursed) and “YHWH” (including the three main letters of the tetragrammaton).

“We recovered 40 letters, 40 on the inside and outside of the tablet. And they were all in this proto-alphabetic script which dates to the Late Bronze Age,” said Stripling.

Galil told The Times of Israel that the text is largely written in an archaic proto-Canaanite script, with some letters coming from hieroglyphs. The latest date of the epigraphic analysis would put it circa the 12th century, while some elements are dated to even earlier.

The majority Hebrew-language text, he posited, was written by Israelites as an internal legal document, a form of social contract, warning the person under contract what would happen if he did not fulfill his obligations.

Galil said the structure is a parallel chiastic, which is found elsewhere in the Bible, as well as in other Near Eastern texts of the period and even earlier. But until now, researchers have held that the Bible was only written down — if not composed — hundreds of years after the posited dating of this text.

“Now we see that someone could write a chiastic” in the 12th century BCE. No longer should the conversation be about whether the Israelites were literate during the time of King David, he said.

“The person who wrote this text had the ability to write every text in the Bible,” Galil stated.