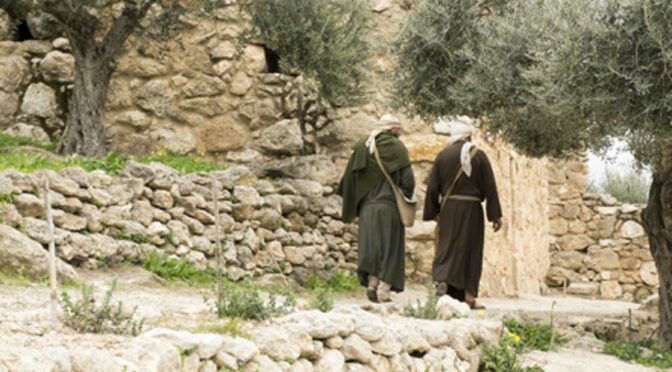 Archaeologists claim 2,200-year-old ruins in Israel could be the remains of the biblical town Emmaus where Jesus travelled after his resurrection

In Israel, archeologists claimed to have found the Actual location of the biblical town of Emmaus, where Jesus first appeared to two followers after being crucified and resurrected.

Researchers have uncovered the remains of a 2200-year-old fortification at Kiriat-Jearim, a hill on the outskirts of Abu Ghosh, a town near Jerusalem.

It is believed that the massive wall of the Hellenistic forts was built by the Seleucid general who defeated Judah the Maccabee, the Jewish leader has spoken of in the Hanukkah story.

Tel Aviv University professor Israel Finkelstein, who leads the archaeologist project with Thomas Romer and Christophe Nicolle of the College de France, now claims that the hill and village should be identified as Emmaus.

In Christianity, Emmaus is significant as Jesus appeared to two of his apostles on the road to the town after his crucifixion and resurrection.

In Luke 24:13-35, the town is described as being fortified and about seven miles west of Jerusalem.

This matches the location of Kiriath-Jearim, Abu Ghosh and Jerusalem, as well as the distance between them.

However, Benjamin Isaac, emeritus professor of ancient history from Tel Aviv University, warned that there are at least two other sites nearby which also have strong claims to be Emmaus.

He said: ‘Finkelstein and Römer have a good case archaeologically, geographically, and topographically.

Judah the Maccabee, a priest who led a Jewish revolt against the Seleucid empire, was defeated and killed at Kiriath-Jearim in 160 BC by the Seleucid army led by general Bacchides.

Bacchides fortified the towns surrounding Jerusalem with large walls, including the biblical town of Emmaus. Archaeologists believe they have found the walls built to fortify Emmaus.

Describing the site, Finkelstein told Haaretz: ‘The importance of this site, its dominant position over Jerusalem, was felt again and again through time: in the eighth century B.C.E., and then again in the Hellenistic period and then again after the First Jewish Revolt and the sack of Jerusalem in 70 C.E.’

The latest research, including the claims about Emmaus, are detailed in a forthcoming paper published in the journal ‘New Studies in the Archaeology of Jerusalem and its Region.’

The project at Kiriath-Jearinm is being run by Tel Aviv University and the College de France. It is being supported by the Shmunis family from San Francisco.

Finkelstein told Fox News: ‘The finds at Kiriath-Jearim hint at its long-term role as guarding the approach to Jerusalem.

‘The Hellenistic and Roman period remains shed light on the much-debated issue of the location of the New Testament’s Emmaus.’

Romer added: ‘Geographically I think that the distance to Jerusalem fits well, so I do think that Kiriath Yearim could have been the Emmaus of the New Testament.’