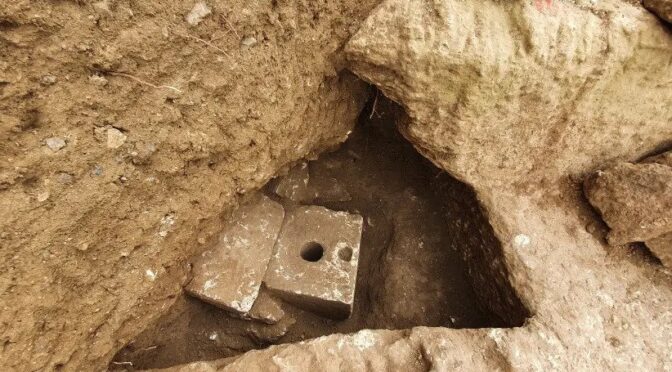 Archaeologists in Israel have unearthed a private toilet dating from the seventh century B.C.E., a time when such a luxury would have been unheard of. According to Amy Spiro of the Times of Israel, the crew discovered the carved limestone fixture ahead of construction in Jerusalem’s Armon Hanatziv neighbourhood.

“A private toilet cubicle was very rare in antiquity, and to date, only a few have been found, mostly in the City of David,” says Yaakov Billig, who directed the dig for the Israel Antiquities Authority (IAA), in a statement.

“Only the rich could afford toilets. In fact, a thousand years later, the Mishnah and the Talmud discuss the various criteria that define a rich person, and Rabbi Yossi [suggests that] to be rich is [to have] a toilet near his table.’”

As Haaretz’s Ruth Schuster reports, a cubicle surrounding the toilet and a deep septic tank beneath it were both carved out of limestone bedrock. The bathroom measured about 5 by 6.5 feet.

The researchers are unsure whether the toilet was carved from bedrock or made out of a finer stone, Billig tells Haaretz.

Inside the toilet cubicle, the team found 30 to 40 bowls. Billig says it’s possible the vessels may have held aromatic oils or incense—early air fresheners for those making use of the facility.

Archaeologists have previously found a number of other toilets in Jerusalem, including one at a building known as the House of Ahiel. In 2016, experts announced the discovery of a separate commode in the ancient city of Tel Lachish, about 40 miles southwest of Jerusalem.

They suggested that ancient Israeli forces may have installed the toilet as a way of intentionally desecrating a pagan shrine. According to Haaretz,  this interpretation is a matter of considerable debate.

Prior to the invention of the modern flush toilet in 1596 and its widespread adoption in the 19th century, people relied on a variety of toilet technologies, reported Jimmy Stamp for Smithsonian magazine in 2014. Most used communal outhouses, chamber pots or humble holes in the ground.

Some Mesopotamians had simple toilets as early as the fourth millennium B.C.E., wrote Chelsea Wald for Nature in 2016. About 1,000 years later, wealthy Minoans developed a system that used water to wash waste from their toilets into a sewer system. And, in ancient Greece and Rome, public latrines connected bench seats to drainage systems.

The newly identified toilet was not connected to a larger system, so servants would probably have had to empty it periodically, per Haaretz.

Researchers found it in the ruins of an ancient palace discovered last year. The team has also unearthed stone capitals and columns, as well as evidence of an ancient garden with orchids and aquatic plants, at the large estate, the Associated Press (AP) reports.

Inside the septic tank, archaeologists found remnants of pottery and animal bones and human waste, reports Rossella Tercatin for the Jerusalem Post. They plan to analyze these discoveries to find out more about dietary habits in the ancient city.

The estate offered a view over the Temple Mount, and, according to Billig, it may have been a residence of a king of Judah.

The team will present its findings at the conference “Innovations in the Archaeology of Jerusalem and Its Surroundings,” which is scheduled to take place Wednesday and Thursday both in Jerusalem and online.