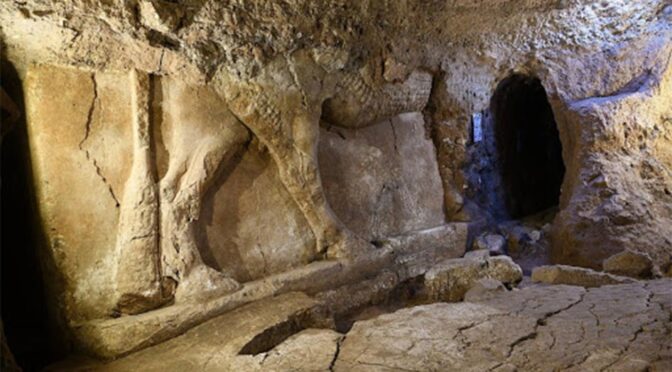 The historically hidden Palace of the Assyrian Kings was revealed when the terrorist group blew up the tomb of the prophet Jonah for ideological reasons.

Two months were spent investigating the tunnels dug by ISIS under the destroyed tomb. The tunnels were found to lead to the military palace founded by Assyrian King Sennacherib in the 7th century BC.

The archeologist who led research on the site, Prof. Peter Miglus, said that Sennacherib’s gold may have been discovered by ISIS.

He said: “We can presume many very valuable objects must now be on the black market.”

The archaeologists found gold objects littered within the tunnels that were discarded by ISIS.

Within this rabbit warren of tunnels dug by the terrorists, the German scientists discovered archaeological treasures, including a 2,000-year-old, 55 meter (180 ft.) long, “throne room”, which was associated with the military palace.

The temple and its carvings date to the final period of the once vast Assyrian empire which dominated Mesopotamia. The great city of Nineveh was once the largest in the world.

A 2018 article in The Guardian said the initial discovery was “a rare piece of good news in the context of so much deliberate destruction and looting by Isis of pre-Islamic archaeology.”

The Iraq Museum’s Iraq Emergency Heritage Management Training Scheme began in 2015 to help combat the many threats to the country’s archaeology, and Sebastien Rey, lead archaeologist at the Iraq Emergency Heritage Management Programme at the British Museum, told The Guardian that the “reliefs are unique with features which we have not seen anywhere else.”

What’s more, he said the archaeologists are incredibly brave working in “extreme danger”, with the mudbrick in danger of collapse at any time.

In December 2016, a U.S. led coalition backed thousands of Iraqi and Kurdish troops in a massive military operation to take back Mosul, the country’s second-largest city, and government forces eventually drove ISIS militants from the area around the Nebi Yunus shrine.

The first local archaeologists on the scene reported that ISIS had dug tunnels deep beneath the holy site searching for treasures and artifacts to sell on the black market.

Then they discovered the treasure tunnels led straight to a previously undiscovered and untouched palace.

In 2018 archaeologist Layla Salih told  The Telegraph she could only “imagine how much Daesh [Arabic term for ISIS] discovered down there before we got here.”

At first sight, it does appear extreme to blow up a mosque and to tunnel hundreds of meters into stone, it is certainly not acceptable, but consider the numbers: in 2017 The Middle-East Observer reported that at The Unesco conference in Paris the deputy Iraqi culture minister, Qais Rashid, said, “in the Mosul region alone at least 66 archaeological sites had been destroyed by ISIS,” and that Muslim and Christian places of worship had suffered “massive destruction”, and thousands of manuscripts had been looted.

Mr. Rashid’s analysis suggested ISIS was funding its acts by smuggling oil (up to $1.645m a day), kidnapping (at least $20m last year), people trafficking, extortion, robbery and last – but not least – “the sale of antiquities.” For example, the sale of looted items from al-Nabuk, west of Damascus, is reported to have earned ISIS $36m.