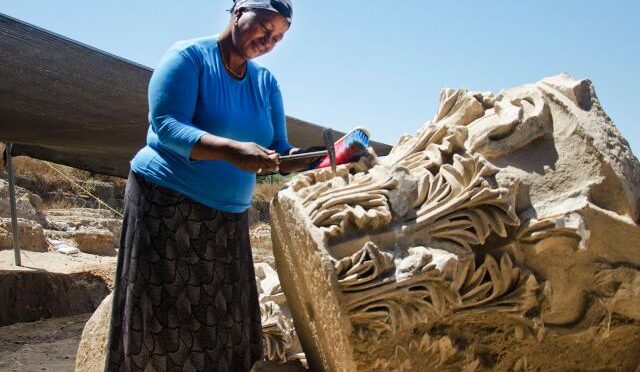 The Roman basilica complex was unearthed in excavations as part of an extensive development project in the Ashkelon national park. Tel Ashkelon National Park has recently undergone extensive development work, initiated and funded by Nature and Parks Authority, Ashkelon Municipality and the Leon Levy Foundation, during which the Israel Antiquities Authority recently revealed a magnificent 2,000-year-old basilica that is the largest of its kind in Israel.

The exciting finds, which also include an ancient odeon (theatre), are now being revealed for the first time and will soon be open to visitors to Tel Ashkelon National Park, enhancing the visitor experience at the site. The site will be opened on completion of the development, conservation and restoration work, which includes erecting sculptures and marble columns found in excavations at the site.

Nature and Parks Authority and the Ashkelon Municipality are also developing and constructing a new network of accessible paths designed to showcase and provide better access to the park’s unique nature, heritage and landscape, thereby enhancing the visitor experience.

During the Roman period, the public life of the city revolved around its basilica (a Roman public building), where its citizens transacted business, met for social and legal matters and held performances and religious ceremonies.

According to Dr Rachel Bar-Natan, Saar Ganor and Fredrico Kobrin, excavation directors on behalf of the Israel Antiquities Authority, “The huge building is covered with a roof and divided into three parts – a central hall and two side halls.

The hall was surrounded by rows of marble columns and capitals, which rose to an estimated height of 13 meters and supported the building’s roof. The floor and walls were built of marble.”

The marble, discovered during many years of archaeological excavations lasting until two years ago, was imported from Asia Minor in merchant ships that reached the shores of Ashkelon, which was a famous, bustling trade city. Roughly 200 marble items weighing hundreds of tons have been found in all, testifying to the building’s great splendour.

Among the items, dozens of column capitals with plant motifs were discovered, some bearing an eagle – the symbol of the Roman Empire. Pillars and heart-shaped capitals stood in the corners of the building.

Excavations by the British in the 1920s unearthed huge statues, including a statue of Nike, the goddess of victory, supported by the god Atlas holding a sphere, and a statue of Isis – an Egyptian deity depicted as Tyche, the city’s goddess of fortune.

The basilica was devastated by the earthquake that struck the country in 363 CE. The effects of the seismic waves are clearly visible on the building’s floor, providing tangible evidence of the events of that year in Ashkelon. After its destruction, the building was abandoned.

During the Abbasid and Fatimid periods, the site of the basilica was transformed into an industrial area and several installations were built in it. In one of these, marble pillars and capitals from the basilica were incorporated in secondary use in the buildings’ walls. There is evidence from the Ottoman period that marble items were cut up for use as paving stones and some of the beautiful architectural features were taken for building construction.

The conservation department of the Israel Antiquities Authority is conducting complex preservation and restoration work on the odeon and the impressive basilica, led by Nature and Parks Authority and generously funded by the Leon Levy Foundation. The work involves placing the spectacular marble sculptures of ancient Ashkelon in the southern part of the basilica. In the first stage, the odeon will be conserved and restored.

Thanks to the Leon Levy Foundation’s donation, it will incorporate modern seating, a stage and a series of explanatory signs. At the same time, a pilot program at the site has begun installing the impressive marble items in place, in a complex operation in which one of the pillars, weighing dozens of tons, was hoisted into the basilica. The floor of the excavated basilica will be restored and filled in, and additional columns will be placed around the perimeter based on lessons learned from the initial program.

The public will then be able to access a magnificent basilica, the largest in Israel. In the meantime, visitors will be able to sit on the seating in the odeon – to be completed in the coming months – and observe the work on the nearby basilica.

Meanwhile, the new system of accessible paths being developed by Nature and Parks Authority and Ashkelon Municipality in the national park aims to make the park’s unique nature, heritage and landscape more readily available, thereby enhancing the visitor experience. The route, about 2 km long, will go through the national park’s main sites, including the world’s oldest arched Canaanite gate, the famous wells of the ancient city, the basilica and the odeon, and the Crusader walls. This chronological trail tracing Ashkelon’s history through the ages will be clearly lined with content signage.

A second trial will lead to the ancient wall and Ashkelon’s dunes, providing a glimpse of the rich flora and fauna to the south of the national park. Between the two trails, in the centre of the park, a new visitor centre will illustrate in an experiential interactive way the vibrant life of the port city and its importance throughout the various periods.

According to Shaul Goldstein, CEO of the Israel Nature and Parks Authority, “The Tel Ashkelon National Park combines a fascinating antiquities site with unique natural resources characteristic of the dunes in the coastal plain. It was the first national park to be declared in Israel in the 1960s and since then, it has been constantly evolving and renewing for the benefit of visitors from all over the country. The unveiling of the basilica and odeon together with the development, preservation and restoration work, which includes the installation of pillars and ancient marble sculptures found in excavations at the site, as well as the addition of new and accessible trails around points of major interest will undoubtedly enhance visits to the park and further emphasize its heritage and uniqueness. We are grateful to our partners for providing tremendous support and guidance in the national park’s development, including the generous assistance of Mrs Shelby White and the Leon Levy Foundation under the close supervision of archaeologist Prof. Daniel Master.”

Ashkelon Mayor Tomer Glam says, “The Ashkelon National Park is one of the most important ancient sites, both in Israel and in the world, and time and time again it emerges as one of the most visited sites in the country. The city takes great pride in it, investing resources and funding in cooperation with Nature and Parks Authority, encouraging visitors by subsidizing entry for Ashkelon’s residents and promoting educational and community initiatives. We have recently also finished upgrading the entrance road to the park, which has been transformed to give the park the dignity it deserves. I am convinced that the restoration and conservation work in the park, the new archaeological discoveries and the development work – including new accessible paths – will contribute significantly to the park’s natural beauty and strengthen its status as the most beautiful and well-kept national park in Israel.”

Shelby White, the founder of the Leon Levy Foundation, explains that the conservation and restoration work was made possible, among other things, thanks to its generous donation, “When Leon and I visited Ashkelon in 1985, we did not imagine that our ties with that ancient seaport would last for over three decades. I am glad that the odeon, one of the many archaeological discoveries made by the Leon Levy expedition, will now be restored and the famous Roman sculptures of Ashkelon will be returned to their original location. Thanks to this, visitors to the Ashkelon National Park from Israel and around the world will be able to imagine this great city in all its ancient glory.”

“The basilica was founded by Herod the Great, and one historical source suggests that his family came from the city of Ashkelon,” add Ganor, Dr Bar-Natan and Kobrin of the Israel Antiquities Authority. “During the Roman Severan Dynasty, in the second and third centuries CE, the building was renovated, marble architectural features were brought to the site and a small theatre was added. Herodian coins discovered in the bedding of the structure’s ancient floors show that it was built at the time of one of the greatest builders ever to have lived in the country. The writings of the historian Josephus mention Herod’s construction in the city of Ashkelon and list fountains, a bathhouse and collonaded halls. Today, based on the new archaeological evidence, we can understand the origins of the historical record.”