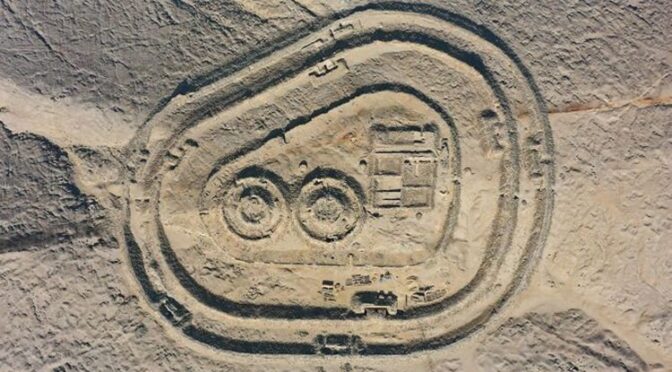 At 2,300 years old, the Chankillo observatory has been described as one of the oldest of its kind in the world — and the oldest in the Americas. It is a construction of 13 stone towers built atop a hill and was once used as a calendar. Only this summer was Chankillo designated a UNESCO World Heritage site.

An ancient Peruvian civilisation built it around two millennia before the ascent of another well-known and now famous sun cult — the Incas. It is believed that they completed it at some point between 250 BC and 200 BC.

According to recent studies of Chankillo, the ancient peoples who used it would have reaped remarkably accurate astronomical observations, also doubling up its use as a temple and administration block. The vertebrae-like structures have been called the ‘Thirteen Towers’ — these are what the ancient astronomers used as an artificial horizon.

By determining the Sun’s position, the civilisation could accurately predict upcoming solstices and equinoxes, and determine the date with a precision of one to two days.

Brian Cox visited Chakillo during his docuseries, ‘Wonders of the Universe.

In a clip from the show titled, ‘Mind-blowing Ancient Solar Calendar’, he wandered across the ancient timekeeping piece and noted how the fortified temple’s walls, “were once painted a brilliant white, covered with painted figures”.

Mr Cox explained that “all but the smallest fragments of the decorations are gone”, leaving researchers in the present-day almost clueless about who made up this ancient civilisation.

For decades, researchers were equally clueless about Chankillo’s purpose.

It wasn’t until 2007 that a study published in the journal Science proposed that the sequence of towers “marked the summer and winter solstices” and that Chankillo “was in part a solar observatory”.

Peruvian archaeologist Ivan Ghezzi, who co-authored the study with a British colleague, Clive Ruggles, told AFP the towers were erected “with great precision,” and were placed to mark different positions of the Sun “and therefore mark exact dates.”

The structure essentially works like a giant clock, marking the passage of time over the span of a year.

In September, the Sun would rise somewhere between the fifth and sixth towers. By December 21, it creeps up between the last of the towers at daybreak.

Mr Ghezzi said: “Chankillo is a masterpiece of ancient Peruvians.

“It is the cradle of astronomy in America.”

And as it was also likely a place of Sun worship, the sites to the east and west of the towers feature the remains of objects used for ritual sacrifices.

The observatory and its ceremonial appendages were protected by fortress walls made of stone, mud and tree trunks, a site spanning an astonishing 5,000 hectares — yet just one per cent of it is believed to have been studied. When the coronavirus pandemic struck, excavations at ancient sites in Peru were abandoned, leading to many raids by black market traders.

While Chankillo was left untouched, nearby farmers expanded their pasturelands on the site’s border. It is hoped that the UNESCO World Heritage status will help to protect it from threats in the future while helping to sustain those struggling farmers.