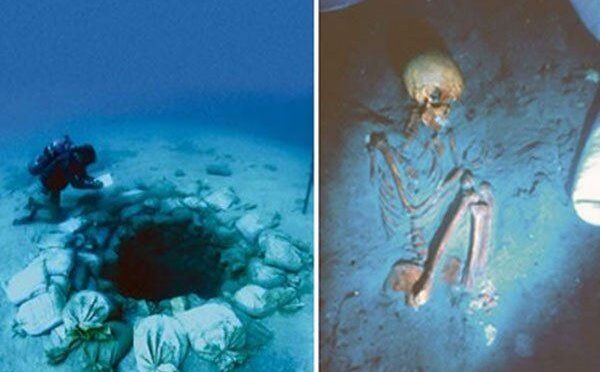 On the Levantine coast, Atlit-Yam offers the earliest known evidence for an agro-pastoral-marine subsistence system. The site of Atlit Yam has been carbon-dated to be between 8,900 and 8,300 years old (calibrated dates) and belongs to the final Pre-Pottery Neolithic B period.

Underwater excavations have uncovered rectangular houses and a well. The site was covered by the eustatic rise of sea levels after the end of the Ice age. It is assumed that the contemporary coastline was about 1 km (a half-mile) west of the present coast.

Piles of fish ready for trade or storage have led scientists to conclude that the village was abandoned suddenly. An Italian study led by Maria Pareschi of the Italian National Institute of Geophysics and Volcanology in Pisa indicates that a volcanic collapse of the eastern flank of Mount Etna 8,500 years ago would likely have caused a 10-story (40 m or 130 ft) tsunami to engulf some Mediterranean coastal cities within hours.

Some scientists point to the apparent abandonment of Atlit Yam around the same time as further evidence that such a tsunami did indeed occur.

Submerged settlements and shipwrecks have been found on the Carmel coast since 1960, in the wake of large-scale sand quarrying. In 1984, marine archaeologist Ehud Galili spotted ancient remains whilst surveying the area for shipwrecks.

Remains of rectangular houses and hearth-places have been found, along with a well that currently lies 10.5 m (35 ft) below sea level, constructed of dry-stone walling, with a diameter of 1.5 m (5 ft) and a depth of 5.5 m (20 ft) lower. The fill contained flints, artifacts of ground stone, and bone and animal bones in two separate layers.

The upper layer contained partly articulated animal bones, which were presumably thrown in after the well went out of use. Other round structures at the site may also be wells. Galili believes that the water in the wells gradually became contaminated with seawater, forcing the inhabitants to abandon their homes.

A stone semicircle, containing seven 600 kg (1,300 lb) megaliths, has been found. The stones have cup marks carved into them and are arranged around a freshwater spring, which suggests that they may have been used for a water ritual.

Ten flexed burials have been discovered, both inside the houses and in their vicinity.

The skeletons of a woman and child, found in 2008, have revealed the earliest known cases of tuberculosis. Bonefish hooks and piles of fish bones ready for trade or storage point to the importance of marine resources.

The men are also thought to have dived for seafood as four skeletons have been found with ear damage, probably caused by diving in cold water. Anthropomorphic stone stelae have been found. The lithics include arrowheads, sickle blades, and axes.

An excavation was mounted by the University of Haifa on Oct 1, 1987. A complete human burial was discovered under 10m of water on Oct. 4th with the skeleton oriented in a fetal position on the right side in an excellent state of preservation. Subsequent carbon dating of plant material recovered from the burial placed the age of the site at 8000 +-200 years.