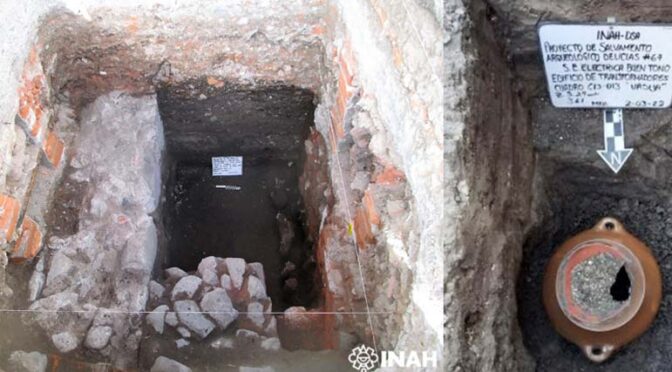 Archaeologists have uncovered the ruins of a dwelling that was built up to 800 years ago during the Aztec Empire in the Centro neighbourhood of Mexico City, Mexico, during works to modernize the area.

The centuries-old abode was discovered by archaeologists and construction workers ahead of an initiative to update electrical power substations.

The dwelling is believed to date from the late Postclassic period (A.D. 1200 to 1521) and would have been located on the border of two neighbourhoods in the city of Tenochtitlan, the capital of the Aztec Empire, according to a statement from Mexico’s National Institute of Anthropology and History (INAH). It spans over 4,300 square feet (400 square meters), or about half the size of a baseball diamond.

During the Late Postclassic, the area that is now being excavated was a residential and agricultural centre, and archaeologists at the site also found the remains of channels and a jetty (a platform where boats stop to load or unload) used in the Aztec chinampa method of farming.

Archaeologists found more Aztec artefacts in the residential area of the excavations. Under the Aztec building’s thick adobe floors, the excavation team found a pair of funerary vessels that contain the bone remains of infants, as well as several burials associated with an offering of censers (vessels in which incense is burned), whorls (a spinning machine or spindle) and spinning tools.

The researchers also unearthed a stone statue that stands just over 23.5 inches (60 centimetres) tall. The statue, also from the late Postclassic period, depicts a man wearing a loincloth who looks as if he is throwing something.

Archaeologists believe that the statue may have been unfinished, as it lacks polish on the body, and they speculated that it may have been hidden at the time of Spanish intervention in the Aztec Empire, which began around A.D. 1521 according to the statement.

Investigations into the remains of the dwelling also show evidence of saddlery and ceramic workshop, which existed on the site in the colonial era of the 16th and 17th centuries.

During the 19th century, it’s possible that part of this site was used as public baths, archaeologist Alicia Bracamontes Cruz, who is involved with the excavation, said in the statement.

Researchers uncovered remnants of these baths, including bathroom tile floors and a drainage system. It’s likely that wealthy people used these baths, according to descriptions in the chronicles of José María Marroquí, a 19th-century Mexican physician and historian.

Archaeological work is expected to continue in the area as a pipeline bank is constructed to go inside the new substation.