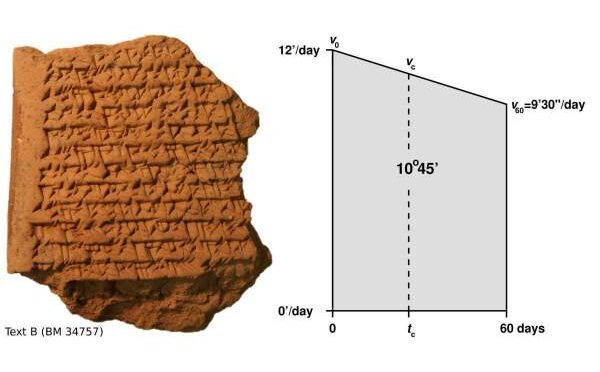 Babylon knew secrets of the solar system 1,500 years before Europe

The ancient Babylonians were known to have been advanced in arithmetic. Now analysis of clay cuneiform tablets found in Babylonia and Uruk shows they could predict the position of celestial bodies using advanced geometric techniques thought to have been invented in 14th-century Europe.

Specifically, the tablets show the ancient Babylonians were evidently intrigued by the position of the planet Jupiter, writes Mathieu Ossendrijver of Humboldt University, Berlin, in his paper “Ancient Babylonian astronomers calculated Jupiter’s position from the area under a time-velocity graph”.

The tablets he describes are the earliest known examples of using geometry to calculate the future position of an object in space-time.

Discover the secrets of the Middle East

It is possible that the same techniques were discovered in Oxford, Cambridge, come the 14th century, in a geometric equivalent of convergent evolution (like wings in insects and in birds, which do not have the same origin but look similar and serve the same function). Or, the West may have learned the techniques somehow from the ancient Babylonian astronomers.

The clay tablets, which are practically intact, seem to date between 350 and 50 BCE. There are issues about provenance – Ossendrijver notes that they were “excavated unscientifically” and discuss general methodology, not mentioning specific astronomical phenomena that could be datable.

The writings describe two intervals after Jupiter appears along the horizon, projecting the planet’s position at 60 and 120 days.

The Babylonians had been thought to know only arithmetic concepts, yet these texts contain advanced geometrical calculations.

Geometry began to develop far back in man’s history.

The eminently practical ancient Greeks used geometry to describe configurations in physical space, though it bears saying that the early history of ancient Greek geometry is unknown because no records remain.

Ancient Egyptians also had geometric knowledge, and had command of trigonometry, but were also believed to have confined their use of the science to workday problem-solving, such as calculating the area of a pyramid.

The ancient Babylonians on the other hand left ample records – over 450 relevant tablets, of which some 340 are tables with computations of planetary or lunar data. Another 110 tablets have computational instructions.

We now know they were using geometry in an abstract sense, to define time and velocity, Ossendrijver explains: “In all of these texts, the zodiac, invented in Babylonia near the end of the 5th century BCE, is used as a coordinate system for computing celestian positions.”

So, he concludes, the 14th-century European scholars in Oxford and Paris who had been credited with developing time-velocity geometric predictions were over a thousand years behind their ancient Babylonian peers.

Why would the Babylonians want to calculate the position of Jupiter, anyway? Probably because their priests used astrology to interpret the will of the gods (an alternative method was to “read” the livers of sacrificed animals): Not only time-velocity geometry but celestial divination as an orderly religious practice is believed to have begun with Babylonian culture.