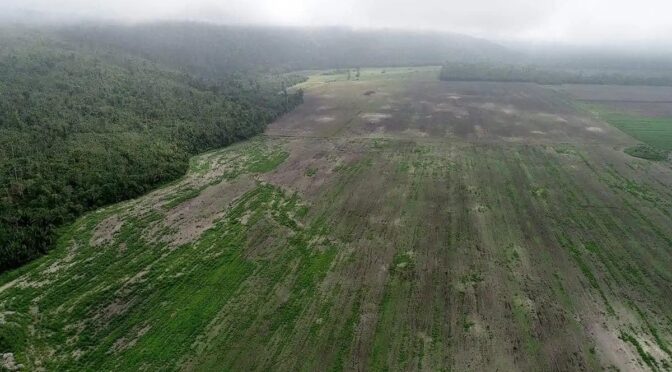 A site first highlighted by a farming community in Belize is enabling archaeologists to piece together what life was like for Mayans living centuries ago.

“We stand in the open fields of Spanish Lookout, a modernized Mennonite farming community in Central Belize, looking at what remains of ancestral Maya homes after years of ploughing,” the two archaeologists write for the University of Illinois Urbana-Champaign.

“White mounds, the remnants of these houses, pock the landscape as far as the eye can see, a stark reminder of what existed more than 1,000 years ago. The collapsed buildings look like smudges on an aerial photograph, but as archaeologists, we get to see them up close. With enough excavation and interpretation, we can eventually make sense of how these dwellings functioned in the deep human past,” they add.

Of course, analyzing an archaeological site first starts with finding it. These days, this is rarely done by going out and digging and hoping for the best — archaeologists have an array of remote sensing tools at their disposal that allow them to peer through the thick jungle and sometimes, even catch a glimpse of what might lie underneath the surface.

But when you have the site in your sights, you still have to analyze it, and this is what Gill and Wang are working on.

Oftentimes, us laypeople at least, focus too much on the imposing structures and cool artefacts found at archaeological sites. But if you want to truly understand a culture like the Maya, you have to look deeper.

The mundane realities of many Mayans aren’t captured in the imposing Maya pyramids or their worshipping complex, but they can be captured in things like pots and tools.

At the Maya site, the two archaeologists are looking at a collection of domestic vessels found for cooking, serving, and storage. The shapes and styles of this pottery enable the archaeologists to date it — one particular neighbourhood was dated to 250-600 AD. In addition, they found several agricultural tools made from chert — an uncrystallized rock with similar chemistry to quartz.

The houses in this neighbourhood would have had walls and plastered floors, as well as several vessels they would have used regularly. Regular Mayans would have used the chert tools to grind maize into flour. They complimented their diets by hunting animals in the forest.

But not everything is clear. For instance, one Maya building uses uniform stones and a different type of plaster than the others, and it’s not exactly clear why.

“We also partially exposed a substantial platform mound that had four structures at its summit. The structures surrounded a plaza or courtyard. It is clear that an elite family lived here. This mound would have been secluded, sectioned off from the rest of the neighbourhood, like the large house at the end of a cul-de-sac where, if you were lucky, you got invited for a pool party, much different from the community building,” the archaeologists explain.

Unfortunately, agriculture is also affecting some of the findings. As local farmers worked the land generation after generation, they dislodged and damaged some of the artefacts and structures. But nevertheless, the signs of the local community are still there. After over a thousand years, their houses, their streets, and the places where they would gather can still tell us stories if we know how to read them.

“The ghosts of those who lived on the land before walk between us, using what remains of their homes to whisper, ‘Remember me.’,” the archaeologists concluded. 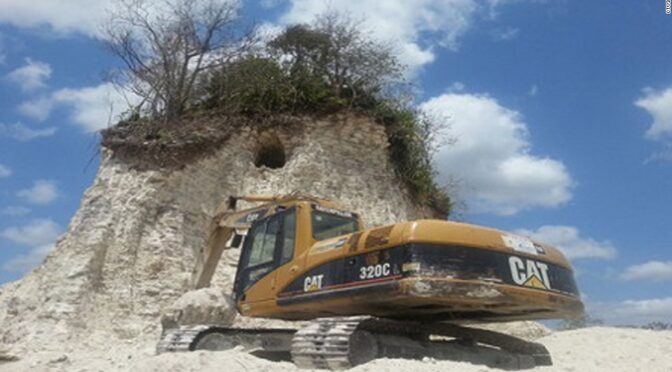 Ancient Mayan pyramid destroyed in Belize by the construction company

A construction company in Belize destroyed one of the oldest and most famous Mayan pyramids while digging for crushed rock for a road they were constructing.

Authorities reported that the company was carrying out the work with bulldozers and backhoes, chipping away at the pyramid’s sides until there was barely anything left.

The Belize Institute of Archaeology’s director, Jaime Awe, said the building had been discovered the previous week. The ceremonial center at the Nohmul complex is thought to be at least 2,300 years old, and it is considered the most significant historical site in northern Belize, near the Mexican border.

“It’s a feeling of Incredible disbelief because of the ignorance and the insensitivity … they were using this for road fill,” Awe told AP. “It’s like being punched in the stomach, it’s just so horrendous.”

Nohmul is located in the middle of a privately owned sugar cane field and its structures lacked the tell-tale signs of a restored cultural site – like the evenly trimmed stone borders at the sides.

Yet, Awe said this could not possibly have been an explanation for how the workers had managed not to take note of what they were doing.

The pyramid is 100 feet (30 meters) tall, while the land around it is flat, so making that kind of mistake is difficult to imagine.

“These guys knew that this was an ancient structure. It’s just bloody laziness”, Awe continued. “Just to realize that the ancient Maya acquired all this building material to erect these buildings, using nothing more than stone tools and quarried the stone, and carried this material on their heads, using tump lines,” he said.

“To think that today we have modern equipment, that you can go and excavate in a quarry anywhere, but that this company would completely disregard that and completely destroyed this building.

Why can’t these people just go and quarry somewhere that has no cultural significance? It’s mind-boggling.”

An investigation is underway by Belizean police, with criminal charges looking like a possibility. Although the Nohmul complex is situated on private land, the law says that any ruins or monuments of pre-Hispanic origin are exempt from it and are under government protection.

A community organization calling itself the Citizens Organized for Liberty through Action has condemned the demolition of the site as “an obscene example of disrespect for the environment and history.”

Hundreds of Mayan ruins remain in Belize, which is largely covered with jungles and counts around 350,000 people among its population. Although this is not the first case that such lack of regard was employed in Belize, Nohmul is among the largest pyramids ruined by such activities.

Many scientists spoke out against what happened. Arlen Chase, chairman of the Department of Anthropology at the University of Central Florida, told AP that “Archaeologists are disturbed when such things occur, but there is only a very limited infrastructure in Belize that can be applied to cultural heritage management.”

The ’70s and 80’s saw much exploration take place around the Nohmul area, but it is important to understand that more knowledge could still be gained, as scientists say.

And such instances of lazy negligence and destruction of Mayan cultural heritage aren’t limited only to Belize. The remnants of the great Mayan nation are under threat in Mexico, Guatemala, and Honduras as well.

Francisco Estrada-Belli, a professor of anthropology at Tulane University, said “I don’t think I am exaggerating if I say that every day a Maya mound is being destroyed for construction in one of the countries where the Maya lived.” 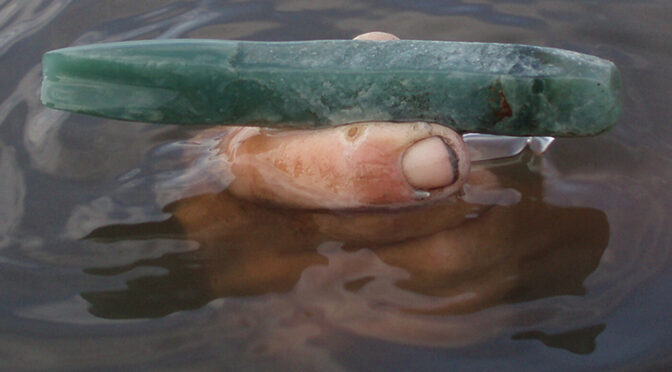 In the enigmatic culture of the Maya people, Jade took up a special place, crafted into elaborate trinkets rich with ancient meaning and lore.

But this precious stone was not meant for decorative or ornamental finery. Jade – in the form of its mineral variety, jadeite – also seems to have had its uses in the toil of manual labour, even among the grinding backdrop of long-ago salt works.

Such an unbelievably well-preserved jadeite gouge tool and its handle were discovered by scientists from the Louisiana State University on the grounds of what was once an ancient Mayan salt work in Belize.

This rare find – preserved among the underwater remains of a salt works called Ek Way Nal – represents the first time such a jadeite object has been discovered with its associated handle (in this case made from Honduras rosewood).

But the fact it was found at a salt works at all is both unexpected and noteworthy, the researchers say.

“High-quality translucent jadeite is normally associated with ritual or ceremonial contexts in the Maya area,” the researchers, led by archaeologist and anthropologist Heather McKillop, explain in a new paper.

“The Ek Way Nal tool is made of exceptionally high-quality jadeite, which is surprising given its utilitarian context.”

Ek Way Nal is one of 110 sites comprising the Paynes Creek Salt Works: the submerged remnants of an ancient salt industry in southern Belize, where salt was produced by evaporating brine in boiling pots over fires.

Dozens of thatched wooden kitchens made up the salt works, built during the Classic Maya period (300–900 CE), but later abandoned when sea level rise flooded the coastal lagoon region.

Producing salt wouldn’t have been easy work, which is why it seems strange that such a high-quality jadeite object was found here, the researchers say.

“During the Classic Period, the use of high-quality translucent jadeite was typically reserved for unique and elaborate jadeite plaques, figurines, and earplugs (earrings) for royalty and other elites,” the team explains.

“Highly crafted jadeite objects were destined for use in dynastic Maya ceremonies, as gifts to other leaders to solidify alliances, or as burial offerings to accompany dynastic and other elites.”

Or, it appears, sometimes rare and valuable jadeite was shaped into chisels, forming the glittering green blade of a salt worker’s tool. While the mineral might seem out of place in this steamy, briny context, McKillop says it shows how the ancient Maya salt trade was going places – until it was washed under the waves.

“The salt workers were successful entrepreneurs who were able to obtain high-quality tools for their craft through the production and distribution of a basic biological necessity: salt,” says McKillop.

“Salt was in demand for the Maya diet. We have discovered that it was also a storable form of wealth and an important preservative for fish and meat.”

While we can’t be sure how the jadeite gouge would have been used, the researchers say it was probably not used on very hard materials, like stone or wood, although an analysis of its worn appearance suggests it was employed as a working tool.

“The use of jadeite as a utilitarian tool in a salt works indicates that even exotic materials, which often require expertise to fashion into tools, were selected for their hardness,” the authors write.

“Although the gouge was probably not employed in working wood or hard materials, it may have been used in other activities at the salt works, such as scraping salt, cutting and scraping fish or meat, or cleaning calabash gourds.”

Not exactly glamorous pursuits then, but it makes for yet another ancient relic that can help us discover the world of the ancient Maya, and learn their story through the objects that once defined them.