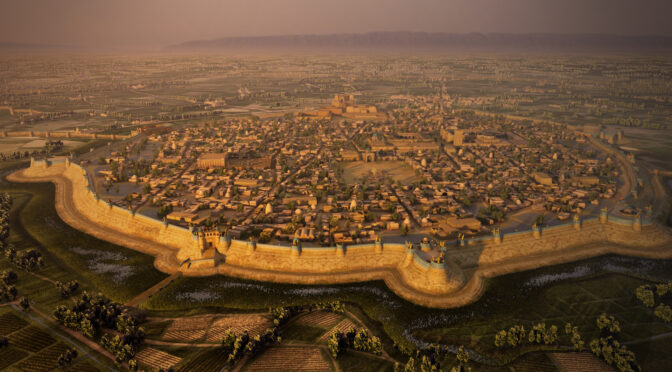 One of the most ancient cities known to exist on earth is Urkesh. Its exact location was a mystery until the 1990s when, after ten years of painstaking excavations, archaeologists identified Tel Mozan in northern Syria near the borders of Turkey and Iran as Urkesh.

The capital city of the Hurrians, it flourished between 4,000 and 1,300 BCE. It initially became powerful because of its location at the intersection of major trade routes as well as its control of valuable copper deposits.

Ruins of monumental public buildings, including a large temple and a palace, have been found. The architecture is not only mud-brick construction but also rare stone structures.

Archaeologists have discovered remains of an open plaza, a monumental flight of stairs, and a deep underground shaft related to religious rituals known as the “Passage to the Netherworld.”

Urkesh dominated the ancient skyline at the top of a built-up terrace that rivaled nearby mountains.

Very little was known about the Hurrians before Urkesh was positively identified. There may not have been many Hurrian cities in what is present-day southern Syria, but their civilization influenced the entire Middle East.

They were a major influence on Mesopotamia to the south and cultures such as the Hittites as cities were first developing in that region.

Unlike the centralized political structures of ancient Assyria and Egypt, Hurrian urban culture seems to have been more feudal in the organization, possibly limiting the development of large palace or temple complexes.

The unique Hurrian language is unlike any other known ancient language. Historians believe that the speakers of this language originally came from the Armenian Highlands and spread over southeast Anatolia and northern Mesopotamia at the beginning of the second millennium BCE.

Khabur ware is characterized by reddish painted lines with a geometric triangular pattern and dots, while Nuzi ware has very distinctive forms, and are painted in brown or black.

Also known for achievements in metallurgy, Hurrians traded copper south to Mesopotamia from the highlands of Anatolia.

The Khabur Valley had a central position in the metal trade, and copper, silver and even tin were accessible from Hurrian-dominated countries in the Anatolian highland. Among the few surviving examples of Hurrian metalwork, some small fine bronze lion figurines were discovered at Urkesh.

Sadly, the Syrian civil war has disrupted the fascinating archaeological activities at Urkesh and endangered future discoveries about the Hurrian culture. The site lies close to the Turkish border and is now protected by Kurdish troops and a team of local workers.

One of the First Known Chemical Attacks Took Place 1,700 Years Ago in Syria

The systematic use of chemical weapons was a characteristic feature of the First World War. Chemical gases of various lethality, including mustard gas, phosgene, and tear gas, were used to disable and kill enemy defenders. Although chemical weapons played a major role during the Great War, its usage can be dated to a much earlier period of history.

The Greek myth of Heracles, in which a hero spills his arrows into his blood of Hydra, to make them poisonous, includes one of the earliest references to the use of chemical weapons. It has also been claimed that poisoned arrows were mentioned by Homer in both his epics, the Iliad and the Odyssey.

In the ancient civilizations of the East, evidence of the use of chemical weapons also appear. In India , for example, poisons can be used in the Mahabharata and the Ramayana during warfare.

Moreover, recipes for poisonous weapons can be found in Kautilya’s Arthashastra, which dates to India’s Mauryan period. In China, there are writings that describe the use of toxic gases by defenders of a city.

The toxic fumes, produced by burning balls of mustard or other toxic vegetables, are pumped into tunnels dug by a besieging army using bellows.

Returning to the Western world, the use of poisonous fumes may be traced to the Peloponnesian War, which took place during the 5 th century B.C. During one of the battles between the Spartans and the Athenians, the former burnt a mixture of wood, pitch and sulphur under the walls of the latter, hoping that the fumes would incapacitate the defenders, and thus disabling their ability to resist the Spartan assault.

The examples provided thus far have been obtained through the surviving literary evidence. For the earliest available archaeological evidence of the use of chemical weapons, however, one would need to look at the site of Dura-Europos, which is located on the bank of the Euphrates River in Syria. Dura-Europos was a Roman city that fell to the Sassanians around the middle of the 3 rd century A.D.

Although there are no literary records about the final siege, archaeology provides a clue as to what happened. Dura-Europos was excavated during the 1920s and 30s by French and American archaeologists.

Among the features found by the archaeologists were mines, one dug by the Persians and another dug by the Romans as a counter. In addition, the piled bodies of at least 19 Roman soldiers and a lone Sassanian soldier in the tunnel were also found.

The initial interpretation was that a fierce battle ensued in the tunnel, where the Sassanians successfully repelled the Roman defenders. After the battle, the Sassanians destroyed the counter-mine by setting fire to it, as evidenced by the presence of the sulphur crystals and bitumen in the tunnel.

In 2009, a re-examination of the evidence led to a re-interpretation of the events that happened during the siege. As the tunnels were too narrow for effective hand-to-hand combat, doubts were cast on the established interpretation. Furthermore, the position of the Roman bodies, stacked deliberately into a pile, suggests that this was not the place where they fell.

The alternate interpretation, as suggested by Prof. Simon James, an archaeologist at the University of Leicester, was that the Sassanians employed toxic gases to kill the Roman defenders. When sulphur and bitumen were thrown onto a fire, it became a choking gas and turned into sulphuric acid when breathed in by the Roman defenders. Within minutes, the Romans who were in the tunnel were dead.

This happened when the Sassanian mine was broken in by the Romans, whose counter-mine was right above theirs. The lone Sassanian soldier may have been a victim of his own weapons and died of the poison gasses as well.

Once the tunnel was cleared, the Sassanians stacked the Roman bodies at the mouth of the counter-mine as a shield wall, and proceeded to destroy this mine, so that they could resume their sapping work.

The archaeological finds at Dura-Europos reveal that chemical warfare was already in use during ancient times, and provides the first physical evidence that the literary sources lack.

How often such chemical weapons were used is another question. Is Dura-Europos a unique example of the use of chemical weapons, or were such weapons more widely used? Perhaps more archaeological evidence will emerge that will provide an answer. 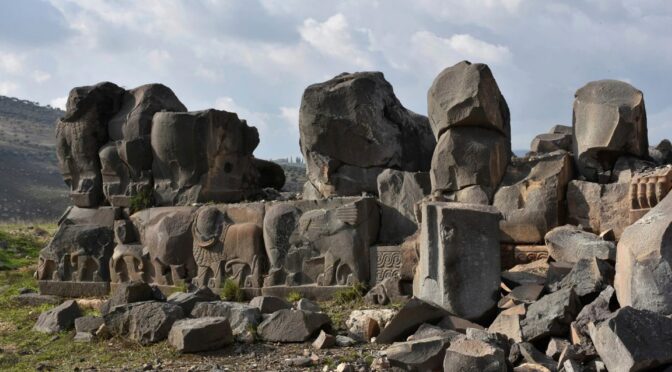 According to a monitoring group and the Syrian government, Turkish airstrikes against Kurdish forces have partially damaged the 3,000-year-old temple in northern Syria.

Cultural Heritage Initiatives of the American Schools of Oriental Research collaboration has been monitoring the destruction of monuments during the war in Syria.

The temple of Ain Dara, just south of Afrin, was “extremely damaged” according to the latest update of the group

The temple was built by a group of people known as the Aramaeans in the early first millennium B.C., after the collapse of the Hittite Empire, at a time when civilizations in the region were emerging from the Bronze Age and entering the Iron Age.

Ain Dara’s walls are made up of basalt orthostats — massive, slab-like architectural blocks — that are elaborately carved on the interior and exterior with geometric designs, floral patterns, mythical creatures and animals like lions.

The limestone pavings in the doorways between the temple’s chambers (the antecella and cella) were decorated with gigantic footprints, every 3 feet (0.9 meters) in length.

Some biblical scholars have argued that the temple’s layout and decorations resemble descriptions of King Solomon’s fabled temple in scripture.

Photos taken after the airstrike show that a large portion of Ain Dara is now covered in rubble.

“The airstrike hit in the area of the doorway between the antecella and cella, causing heavy damage to the central and southeastern portions of the building,” ASOR representatives wrote in the update. “Many of the orthostats, which were already fragile due to decades of exposure to weathering, have been blasted into fragments.

“The limestone pavings of the antecella and cella have also been badly damaged,” the ASOR report added. “Metal fragments, including a piece that may be a stabilizing fin from the bomb or missile used in the attack, were recovered in the area. The satellite imagery reveals that the rest of the mound was unharmed by the airstrike.”

The independent Syrian Observatory for Human Rights, which is monitoring the war, also  posted pictures of the site saying the ruins were “destroyed by shelling of the Turkish warplanes.”

The Syrian government’s antiquities department issued a call for international pressure on Turkey “to prevent the targeting of archaeological and cultural sites” in Afrin.

Turkey has led an assault on the Syrian Kurdish enclave Afrin, according to the Associated Press.

The city is held by the People’s Protection Units, a Kurdish militia known as the YPG, which Turkey considers a terrorist group and a threat to its security; the United States has considered the YPG an ally in the fight against ISIS, Reuters reported.