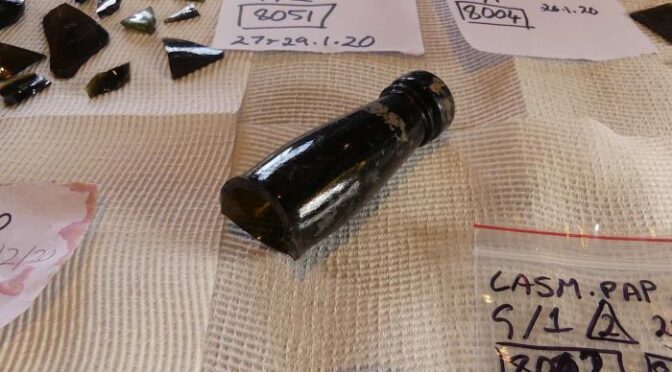 In the structural remains of solitary cells of the convicts in Tasmania, archaeologists have unearthed hundreds of convict era artefacts. 160 prisoners took part in the construction of a highway between Hobart and Launceston between 1838 and 1847 at the Picton Road Station in the Southern Midlands.

Archeologists found ceramics, tableware, bottles, bones and tools during an excavation on the site during the summer. Professor Eleanor Casella from the University of Tasmania said they also unearthed solitary cells used to house convicts.

“The solitary cells themselves are brutal,” she said.

“They’re eight foot by four foot [2.4 metres by 1.2 metres]. They’re so small. It wouldn’t have been a comfortable experience.”

The presence of so many alcohol bottles Professor Casella has confirmed it was shocking. “It’s supposed to be heavily regulated in these kinds of punishment stations,” she said.

“We’ve got gin case bottles that have been imported all the way from the Netherlands, plus beer bottles.”

The site on private farmland along the Midlands Highway, near Kempton, was discovered in 2012 when a farmer was doing agricultural work. There have been two archaeological digs at the site, carried out with University of Tasmania students and the Southern Midlands Council.

Archaeologist Angela McGowan said she worked on the excavation of the southern wing of the station, which was the first part built.

“The first and most surprising thing we found was some extra wall footings at the back of the trench, so we found a whole small room that wasn’t on the 1841 plan,” she said.

“We have found a great deal of butchered animal bones, cuts of meat basically.”

“We certainly found quite a lot of rubbish, broken bottles, broken china, some bits of iron that had been washed down and washed through the hole in the wall,” she said.

Deborah Baldwin, the collections, exhibitions and data officer at the Southern Midlands Council, said processing the artefacts had given her an idea of what a convict’s diet was like.

“It was pretty heavy on the meat, but because they were working on the road, breaking stones, they did need a reasonable diet,” she said.

“There were lots of sheep jaws, so they were using the heads and lots of long bones, ribs and that sort of thing.”

Ms Baldwin said the ceramics were in good condition.

“The ceramics, because they have been fired, seem to fare fairly well underground,” she said.

“Obviously they get dirty, but the glass can change because it interacts with the salts and moisture in the soil.” Another archaeological dig will be held at the Picton Road Station site in 2021. 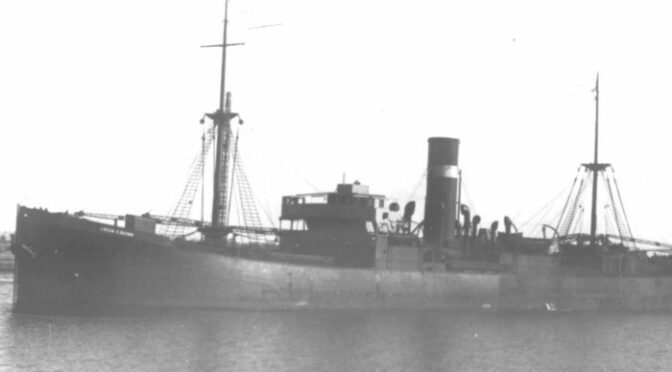 Long-lost shipwreck found off Victorian coast, 77 years after being torpedoed by Japanese submarine in WWII

The wreckage of an Australian freight ship sunk by a Japanese submarine during World War II has been uncovered by archaeologists off the coast of Victoria.

The ore freighter SS Iron Crown sank within 60 seconds in June 1942 after it was hit by a torpedo while travelling through Bass Strait, killing 38 people.

The shipwreck was discovered by marine archaeologists aboard CSIRO research vessel Investigator, using sonar equipment and a special drop camera.

Maritime archaeologist at Heritage Victoria Peter Harvey said he hoped the discovery would bring closure to the families of the seamen who died.”The ship is in a really good state of preservation, although I’m pretty sure the stern of it, where it was hit by the torpedo, was pretty broken up,” he said.”

The archaeology of these sites enables us to finally find out what happened and why it happened.”

It tells us the human story of the wreck.”SS Iron Crown was a 100-metre-long freighter that was chartered by BHP to transport ore from Whyalla in South Australia to Newcastle in New South Wales.

There were 43 crew from the Australian Merchant Navy on board, but only five sailors survived.

According to the Heritage Council of Victoria, the survivors managed to grab lifejackets, jump clear of the ship and cling to wreckage until they were rescued by SS Mulbera.”

There were roughly 13 Japanese submarines operating on the Australian coast around that time that resulted in quite a number of casualties that nobody really knew about until well after the war,” Mr Harvey said.”

“The loss of 40 lives is a terrible thing in any measure, but I think if it had been common knowledge at the time, I think Australians would’ve been quite alarmed.

I don’t think the majority of the population was aware that there was so much enemy activity off the coast of south-eastern Australia.”

Voyage chief scientist Emily Jateff from the Australian National Maritime Museum said the shipwreck was found 100 kilometres off the Victorian coastline.”The wreck of Iron Crown appears to be relatively intact and the ship is sitting upright on the seafloor in about 700 metres of water,” she said.”

We have mapped the site and surrounding sea floor using sonar, but have also taken a lot of close-up vision of the ship structure using a drop camera.”

Ms Jateff said it was an important discovery.

“The fact that so many lives were lost … was something that hit home with all crew working onboard Investigator.”

The finding has been reported to the Australian Government and a memorial service will be planned for the site.

One of the saddest’ parts of seaman’s life

Tasmanian man George Fisher worked on the Iron Crown as a deck boy when he was 18 and was one of the five survivors.

He was the last surviving crew member before his death in 2012. In an interview with the Australians at War Film Archive in 2003, Mr. Fisher was asked whether the sinking of the Iron Crown haunted him.”

“At times I get sort of upset when I sort of think of it.

That’s a very sad part of my life, perhaps. One of the saddest.”His partner Lorraine Silvester said she was emotional when she heard about the discovery.”George was so passionate about having his shipmates remembered,” she said.”

It’s a pity it wasn’t found before he died.”Ms Silvester said Mr Fisher had been coming up from below deck when he heard a terrible explosion.”

He grabbed the life jacket and he was calling to all the others to get out, get out,” she said.”They knew the ship was going down. He jumped overboard, and it was the life jacket that saved him.”Mr Fisher kept in touch with the other survivors, including his close friend Bruce Miel from Adelaide.

Before Mr. Fisher died, he organized a plaque to be placed near the cenotaph in Mallacoota in Victoria to honor his shipmates.