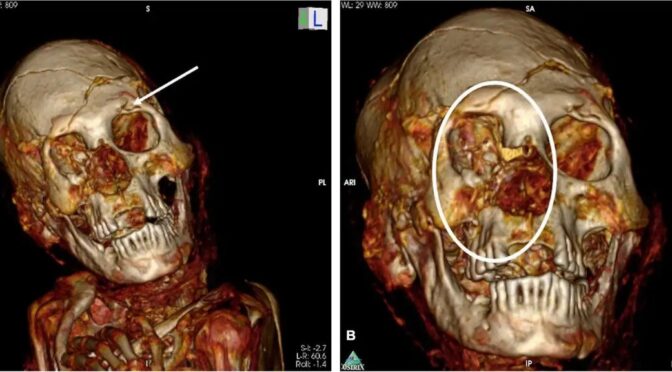 Around 1,000 years ago, two men in South America were likely murdered in cold blood — one getting stabbed in the back and the other experiencing severe neck trauma, according to a new analysis of their mummified remains.

Behaving more like detectives than academics, a research team scanned three mummified bodies from Chile and Peru in South America to look for clues on how the individuals died. One male victim was hit on the head and stabbed in the back, while another male was likely killed after receiving “massive trauma” to the neck, which included dislocation, the researchers revealed.

The study adds to evidence of violence in prehistoric human societies and highlights how mummified remains can hold secrets that are lost when only bones are preserved. Both the stabbing and the cervical rotational trauma of the dislocated neck would have escaped detection in skeletons, the authors wrote in the study.

“The types of trauma we found would not have been detectable if these human remains had been mere skeletons,” study co-author Andreas Nerlich, a professor in the department of pathology at Munich Clinic Bogenhausen in Germany, said in a statement(opens in new tab).

Human bodies can be naturally mummified in dry, cold or other extreme environments, as these environments interfere with the process of decay that normally destroys soft tissues and organs. In this case, researchers studied mummies that were preserved in the very dry environments of South America and were held by museums in Germany and Switzerland.

Radiocarbon dating revealed that the mummies were between 740 and 1,120 years old, meaning they predated the colonial Spanish period.

One male mummy likely came from the Arica culture in what is now northern Chile. He was buried alongside fishing tools, so the researchers determined he likely came from a fishing community.

The two other mummies, a male and female, likely came from the Arequipa region in what is now southwestern Peru and were buried wearing materials made out of cotton and hair from llamas or alpacas, as well as viscachas, which are rodents in the chinchilla family.

The researchers used computed tomography (CT) scans to create virtual 3D reconstructions of the bodies, which revealed previously hidden details about their deaths. While the female died of natural causes, both of the male mummies died from extreme intentional violence, according to the research.

Other mummified remains may also have histories waiting to be revealed through modern scanning and reconstruction techniques. “There are dozens of South American mummies which might profit from a similar investigation as done here,” Nerlich said.

The study was published online on Sept. 9 in the journal Frontiers in Medicine.