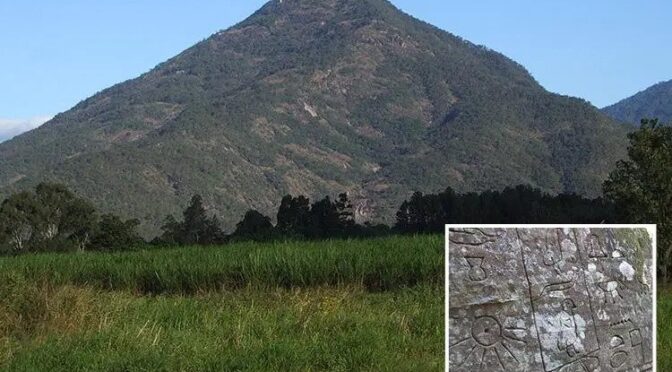 Did the Ancient Egyptians reach Australia? Archaeologists claim a MAN-MADE structure was built under this mountain 5,000 years ago

An archaeologist believes that there’s a MASSIVE 900-meter tall pyramid hidden in plain sight beneath thick layers of vegetation and soil in Australia. The structure is believed to date back some 5,000 years.

Pyramids are scattered all across the globe. No matter where we look, ancient cultures built marvellous ancient structures across the planet, with the most notorious monument being the Great Pyramid of Giza, an ancient wonder of engineering still standing today after thousands of years.

Now, a group of amateur archaeologists from Australia claims that before Australia was visited by the Europeans—in fact, thousands of years before that, I might add—the ancient Egyptians visited the mainland of Australia and even built Pyramids there.

As outrageous as this may sound to many, according to the group of researchers, more than 5000 years after ancient Egyptians made their way to Australia, it is believed that a Pyramid built under a mountain in North Queensland has been discovered.

According to a set of Hieroglyphs found in Gosford, there are TWO pyramids in Australia – one at Gympie (pictured) here, which has been demolished, and another one which still stands today. The group claims how ‘Walsh’s Pyramid’, located some 30 minutes west of the popular Australian coastal city, stands a staggering 922 meters in height.

The Pyramid is said to be the final resting place of Egyptian Royal Lord Nefer-ti-ru, according to the group. And exactly where most people see only a massive Pyramid-shaped hill is where the vivid group of archaeologists sees more than what initially meets the eye.

Evidence of their claims is supported by the curious “Gosford Glyphs,” a set of strange carvings that according to many researchers are Egyptian in nature.

Located in the vicinity of Sydney, the intricate carvings are believed to be thousands of years old and were allegedly carved by ancient Egyptian sailors when they discovered the Australian continent, some 5,000 years ago.

These are the Gosford Glyphs.

These curious sets of hieroglyphs are referred to as the Kariong Hieroglyphs due to the fact they are located in the Brisbane Water National Park, Kariong, and also called the Gosford Glyphs due to the nearby community of Gosford can be seen in New South Wales.

But countless controversies surround the alleged hieroglyphs. Numerous archaeologists have made it clear that the Gosford Glyphs are nothing more than a modern forgery, and how it’s IMPOSSIBLE that the ancient Egyptians made their way to Australia and carved the curious set of symbols on the side of a massive rock, let alone build pyramids.

As we wrote previously, is said that amateur archaeologist Ray Johnson supposedly translated the alleged glyphs for the Museum of Antiquities in Cairo and was successful in documenting and translating the two facing walls of Egyptian characters.

The translation of the Gosford Glyphs supposedly records the story of a tragic saga of ancient Egyptian explorers that shipwrecked in a strange and hostile land—now known as Australia.

Anyway, returning back to the Pyramid in Australia, Ray Johnson is convinced how the enigmatic set of hieroglyphs at Gosford undoubtedly point how Lord Nefer-ti-ru, a former member of the ancient Egyptian Royal Family is buried at the site. Furthermore, Johnson is convinced how the Gosford Glyphs tell the story of how ancient Egyptian sailors built TWO Pyramids in Australia, one of which was said to be found at Gympie, in central Queensland.

This is the alleged Pyramid in Australia, rising a staggering 900 meters in the air. The Pyramid (pictured), is located outside Cairns in north Queensland. It was eventually demolished leaving the whereabouts of the other Pyramid an enigma all until now.

Mr Johnson believes that the second Pyramid is in fact located beneath thick layers of soil, hidden away from sight, remaining unperceived for thousands of years. Despite the fact that the “hieroglyphs” point to the existence of a Pyramid located in the Area, the site in question—located at the Wooroonooran National Park—has never been researched.

This is mostly due to the fact that experts consider the location where Johnson believes the Pyramid is located a Natural granite peak. However, archaeologists are convinced that this pyramid could be similar to the one discovered buried beneath thick layers of soil and vegetation in Visoko, Bosnia and Herzegovina.

However, mainstream scholars reject the notion there’s a Pyramid in Australia—let alone two—and that the mountain where said structure is supposedly located, only ‘appears to be the shape of a pyramidal structure’.