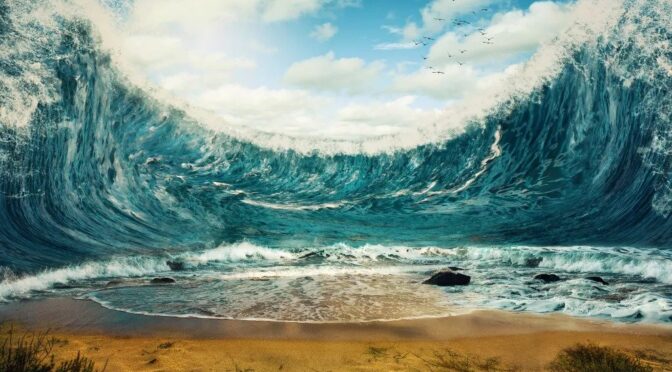 Archaeologists have found evidence of the largest known earthquake in human history — a terrifying magnitude-9.5 megaquake that caused a 5,000-mile-long (8,000 kilometres) tsunami and prompted human populations to abandon nearby coastlines for 1,000 years, a new study finds.

The earthquake struck about 3,800 years ago in what is now northern Chile when a tectonic plate rupture lifted the region’s coastline. The subsequent tsunami was so powerful, that it created waves as high as 66 feet (20 meters) and travelled all the way to New Zealand, where it hurled car-size boulders hundreds of miles inland, the researchers found.

Until now, the largest earthquake ever recorded was the 1960 Valdivia earthquake, which hit southern Chile with a magnitude between 9.4 and 9.6, killing up to 6,000 people and sending tsunamis barreling across the Pacific Ocean.

The rupture that caused the Valdivia earthquake was enormous, extending as far as 500 miles (800 km) in length. But, as scientists detail in research published April 6 in the journal Science Advances, the newly discovered ancient megaquake was even bigger, coming from a rupture roughly 620 miles (1,000 km) long.

“It had been thought that there could not be an event of that size in the north of the country simply because you could not get a long enough rupture,” study co-author James Goff, a geologist at the University of Southampton in England, said in a statement.

Like the Valdivia earthquake, the ancient quake was a megathrust earthquake, the most powerful type of earthquake in the world. These earthquakes occur when one of Earth’s tectonic plates gets forced, or subducted, underneath another.

The two plates eventually get locked into place by friction, but the forces that caused the plates to collide continue to build. Eventually, so much strain gathers that the point of contact between the plates rips apart, creating a gigantic rupture and releasing energy in the form of devastating seismic waves.

Evidence for the giant quake was found in marine and coastal items — such as littoral deposits (boulders, pebbles and sand native to coastal regions) and marine rocks, shells and sea life — that the researchers discovered displaced far inland in Chile’s the Atacama Desert.

“We found evidence of marine sediments and a lot of beasties that would have been living quietly in the sea before being thrown inland,” Goff said in the statement. “And we found all these very high up and a long way inland, so it could not have been a storm that put them there.”

To get a better sense of what brought these deposits so far from the sea, the researchers used radiocarbon dating. This method involves measuring the quantities of carbon 14, a radioactive carbon isotope, found inside a material to determine its age.

As carbon 14 is everywhere on Earth, deposits easily absorb it while they form. The half-life of carbon 14, or the time it takes for half of it to radioactively decay, is 5,730 years, making it ideal for scientists who want to peer back into the last 50,000 years of history by checking how much-undecayed carbon 14 a material has.

After dating 17 deposits across seven separate dig sites over 370 miles (600 km) of Chile’s northern coast, the researchers found that the ages of the out-of-place coastal material suggested that it had been washed inland some 3,800 years ago.

Further evidence also came in the form of ancient stone structures that the archaeologists excavated. These stone walls, built by humans, were found lying beneath the tsunami’s deposits, and some were lying backwards, pointing toward the sea, suggesting that they had been toppled by the strong currents of the tsunami’s backwash.

“The local population there were left with nothing,” Goff said. “Our archaeological work found that a huge social upheaval followed as communities moved inland beyond the reach of tsunamis. It was over 1,000 years before people returned to live at the coast again, which is an amazing length of time given that they relied on the sea for food.”

As this is the oldest known discovery in the Southern Hemisphere of an earthquake and tsunami devastating human lives, the researchers are excited to probe the region further. They think their research could better inform us of the potential dangers of future megathrust quakes.

“While this had a major impact on people in Chile, the South Pacific islands were uninhabited when they took a pummeling from the tsunami 3,800 years ago,” Goff said. “But they are all well-populated now, and many are popular tourist destinations. So when such an event occurs next time, the consequences could be catastrophic unless we learn from these findings.”