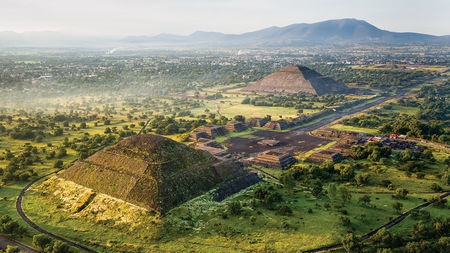 Found: The Oldest and Largest Maya Structure in Mexico

The oldest and largest Maya monumental structure on record has just been discovered after scientists shot millions of lasers from a plane to map an area in southern Mexico.

At the newfound site, called Aguada Fénix, researchers found an artificial plateau measuring about 0.9 miles (1.4 kilometers) long, 0.2 miles (399 meters) wide, and between 33 and 50 feet (10 and 15 m) high. And it likely served as a communal gathering place for the Maya.

The discovery pushes back when archaeologists thought this civilization built large structures, especially because there weren’t yet any dynasties to organize such an endeavor.

“It forced us to change our understanding of the development of Maya civilization and the development of human society in general,” said Takeshi Inomata, a professor of anthropology at the University of Arizona, who led a new study on the finding.

Archaeologists have traditionally thought that the Maya civilization developed gradually. From 1200 B.C. to 1000 B.C., the people in the Maya lowlands were thought to have moved about, with a combination of hunting, gathering, and some farming, including growing maize.

It wasn’t until the Middle Preclassic period (1000-350 B.C.), the thinking went, that small village began to emerge, along with the creation of ceramics and a transition to sedentism — staying in one place for a long time.

According to this theory, the Maya didn’t begin building ceremonial centers with large pyramids until much later, sometime between 350 B.C. and 250 B.C. However, this idea is now under fire. Radiocarbon dating of 69 samples from Aguada Fénix shows that it was used between 1000 B.C. and 800 B.C. After it was largely abandoned by 750 B.C., small groups returned to use the structure.

Aguada Fénix isn’t the only site overturning the traditional interpretation. For instance, a ceremonial complex and artificial plateau built at Ceibal in 950 B.C. (until now, considered the oldest Maya ceremonial center), indicates that the early Maya built large structures even before the civilization became organized under dynasties with centralized government, the researchers said.

Not ‘deep in the jungle’

Aguada Fénix wasn’t hidden deep in the jungle, but rather on a cattle ranch in Tabasco, Mexico, near the northwestern Guatemalan border. Nobody knew about this site because it’s so big, that if you walk on the site it just looks like a natural landscape, Inomata told Live Science.

After finding the site in 2017, Inomata and his colleagues did a lidar (light detection and ranging) survey at Tabasco. With lidar, a plane flies over an area while equipment on board shoots millions of lasers that can pass through vegetation and generate 3D maps depicting the shape of the Earth and the structures on it.

“In other words, the main plateau of Aguada Fénix is the largest construction in the pre-Hispanic Maya area,” the researchers wrote in the study. After the lidar survey, the researchers excavated the plateau to learn more about its construction. During that time, the team found jade and stone artifacts that were likely used in rituals at Aguada Fénix.

Power to the people

Aguada Fénix bears some similarities to San Lorenzo, an even larger artificial plateau built by the Olmec, who thrived there from 1400 B.C. to 1150 B.C. in what is now the Mexican state of Veracruz. San Lorenzo also has colossal sculptures of stone heads and thrones, a clue that the Olmec society already had a hierarchy because it was honoring certain elites.

There is a debate on whether the Olmec civilization led to the Maya, or whether the Maya developed independently, Inomata noted.

Aguada Fénix differs in other ways from San Lorenzo; it incorporates distinctly Maya features, including raised causeways and reservoir systems, said Lisa Lucero, a professor of anthropology at the University of Illinois at Urbana-Champaign, who was not involved with the study.

While later Maya pyramids were built for the elite, Aguada Fénix was built by the people, for the people. “This big plateau is basically for everybody,” Inomata said. “It’s a place where people [could] gather.”

It’s no surprise that the Maya built a place to congregate, Lucero said. Other monumental structures, including Stonehenge in Great Britain and Göbekli Tepe in Turkey, show “when people lived dispersed and/or a more nomadic lifestyle, that they created a community to build such places,” and they didn’t need elite political leaders to organize it, she said.

At Aguada Fénix, Maya who was dispersed due to agricultural demands could come together to work, celebrate, share knowledge, exchange goods, meet potential mates, worship, and so on, Lucero told Live Science.

“Based on the different soils, it is likely that people from many different communities built Aguada Fénix, even bringing soils from their homes,” she added. The study was published online June 3 in the journal Nature.