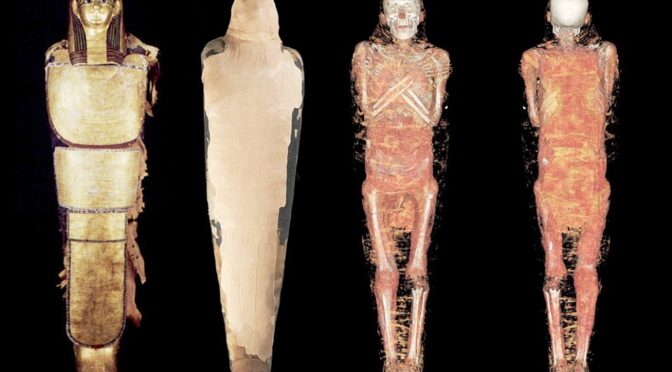 The mummies, which had been buried in graves, are thought to date between 1100 and 400 B.C.

The remains of four mummified humans dressed in bright colours and buried in formal graves have been uncovered during work to expand the Quebrada Blanca copper mine in the north of Chile, the mine’s operators said on Friday.

The remains were found last year during excavations for a new port and could date back to Mesoamerica’s Early Formative Period that ran between around 1,100 and 400 BC, Canada’s Teck said.

The company said the mummies, wearing sophisticated turbans and sandals, had been perfectly preserved in the arid climate. Tests are now being run on them to determine their precise age.

“As a result of the saline conditions of the soil, the lack of rainfall and relatively low humidity, the remains are mummified in complete outfits and with a number of implements that indicate their way of life,” it said in a statement.

The company has reported the find to the Chilean government, which will determine how to preserve the artefacts, described by archaeologist Mauricio Uribe as “one of the most remarkable finds of recent years in the Norte Grande region.”

Teck said it would preserve the area and maintain archaeological monitoring during the remainder of the project, which seeks to extend the mine’s useful life by almost 30 years.

To read about mummies found in the Chilean desert that date as far back as 5000 B.C., go to “Atacama’s Decaying Mummies.”