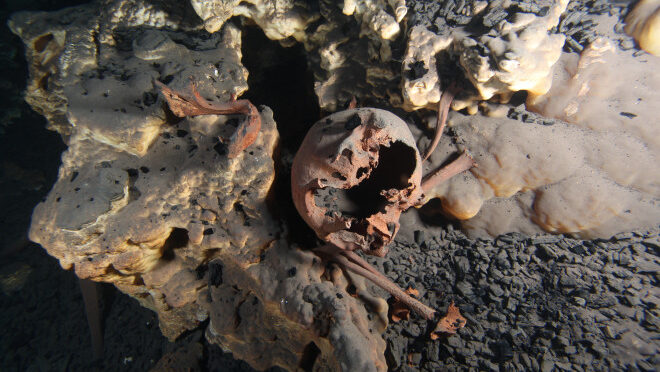 The earliest humans in North America were far more diverse than previously realized, according to a new study of human remains found within one of the world’s most extensive underwater cave systems.

The remains, discovered in the caverns of the Mexican state of Quintana Roo, represent just four of the earliest North Americans, all of whom lived between 9,000 and 13,000 years ago. They’re important because North American remains from the first millennia of human habitation in the Americas are rare, said study leader Mark Hubbe, an anthropologist at The Ohio State University. Fewer than two dozen individuals have been discovered, he added.

What makes the four individuals from Mexico interesting is that none of them is quite alike. One resembles peoples from the Arctic, another has European features and one looks much like early South American skulls, while the last doesn’t share features with anyone population.

“The differences we see among these Mexican skulls are on the same magnitude as the most different populations nowadays,” Hubbe told Live Science.

The settlement of the Americas is a complicated topic, shrouded in mystery because of the dearth of archaeological findings from 15,000 to 20,000 years ago, which is probably when the first humans set foot on the continent. South America has more early human remains than North America, Hubbe said. The skulls found in South America are typically quite similar to one another, sharing features of skull measurements with indigenous Australians and Africans.

This doesn’t mean that the South Americans had ancestors who came directly from Australia or Africa, Hubbe cautions. Rather, the shared features reveal a shared common ancestry between ancient South Americans and the peoples of Australia and Africa.

“The [skull] morphologies in Asia changed a lot in the last 10,000 years,” Hubbe said. “Everyone who came [to the Americas] before 10,000 years ago would look a lot like early modern humans out of Africa and Australia.”

“For whatever reason, when they went to South America, part of this diversity disappeared,” Hubbe said.

The extensive caves of Quintana Roo are now mostly underwater. But about 12,000 years ago, during the end of the Pleistocene epoch and the beginning of the Holocene, sea levels were lower and the caves were dry. Some of the early inhabitants of Mexico seemed to use the caves as burial places, deliberately placing bodies inside. Some other skeletons discovered in the caves appear to indicate that those people’s deaths may have been accidental.

Of the four skulls studied in the new research, published today in the journal PLOS ONE, one came from a young adult woman who lived around 13,000 years ago; one belonged to a young adult male from the same era; one was from a middle-aged woman who lived between about 9,000 and 12,000 years ago, and the fourth was that of a middle-aged man from around 10,000 years ago. Hubbe and his co-authors used computed tomography (CT) scanning to re-create digital, 3D images of the skulls. They then marked various landmarks on the skulls, such as the bottom of the nose or top of the eye orbits. Sizes and distances between landmarks were then used to compare the skulls to larger data sets of measurements from different populations of people around the world.

There are limitations to working with the data of only four people, Hubbe said – after all, any given individual can be an outlier compared with the rest of his or her community. But, in an attempt to downplay any individual quirks of the skulls, the researchers focused only on the components of the measurements that explained the majority of the variations between skulls. By limiting the analysis to only major variations, they could avoid putting too much weight on smaller differences between skulls.

They found that the 13,000-year-old young woman had features that most closely matched Arctic North Americans from Greenland and Alaska. The young man from 13,000 years ago, on the other hand, looked most similar to people from European populations. The middle-aged female from between 9,000 and 12,000 years ago looked much like the earliest settlers of South America. Finally, the middle-aged man from around 10,000 years ago showed no clear pattern. He had features seen in several American and Asian populations.

The findings are important because they provide new information on the earliest Americans, said Richard Jantz, an anthropologist at the University of Tennessee who was not involved in the research. The skulls are diverse, he said, though he noted that all but the young man from 13,000 years ago had Asian or Native American affinities, so the differences shouldn’t be overexaggerated.

The new information complicates the fuzzy picture of who the first Americans were and how the earliest migrations worked.

North America could have been more diverse than South America if there were a consistent flow of people – and new genes – into North America, but only one or two big movements of populations through the funnel of Mexico into South America, Hubbe said.

“We cannot test this at this point,” he said.

That story also contradicts the genomic data researchers have collected. Genomics suggests that all Native Americans (with the exception of a few later migrants) descend from a single migration of people from Asia. But research-based on phenotype – the way people looked – suggests multiple migration events, creating a population that got regular injections of diversity.

“I think if America consisted of a homogenous population 10,000 or 15,000 years ago, that drawing skulls at random from it would not produce as much variation as you see,” Jantz said.

In today’s humans, Jantz said, genomics data and skull shape data generally mesh well — people with similar ancestry tend to show similarities in their skull measurements. So far, the same does not seem to be the case for the earliest Americans. But there are limitations in data on both the genetic and the archaeological sites, Jantz said. Genomics researchers have only three ancient DNA samples from North America, and modern Native Americans’ genetic profiles have been complicated by genocide and mixture with Europeans. Researchers who study skull morphology have only a handful of bones to work with, as well.

“To me,” Jantz said, “the biggest challenge is reconciling conflicting lines of evidence.”