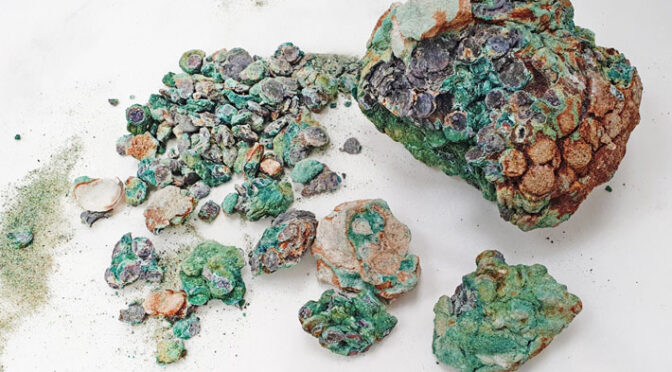 Ancient coins dating to 1,700 years ago were discovered by a family during a camping trip on an Israeli beach near Atlit on Tuesday. Yotam Dahan, a tour guide from Klil in northern Israel, found a bundle of antique coins during a family camping trip in Habonim beach.

The bundle of coins, weighing a total of 6 kg., agglutinated after years of lying underwater. They were determined to have been used in the fourth century CE, following an inspection by expert Dr Donald Tzvi-Ariel.

After posting photos of the coins to Facebook, Dahan was contacted by Israel Antiquities Authority’s (IAA) Haifa District director Karem Said to identify the exact location of the discovery on the beach.

“Archaeological sites are prevalent all along the Habonim beach strip,” Sharvit said. “Archaeological records show vessels were often washed ashore along with all their cargo,” he added.

“The bundle of coins found shows they were packed together and agglutinated due to oxidation of the metals,” Sharvit noted.

Dahan generously handed the coins to IAA’s Treasures of the State Department and was subsequently given a certificate of appreciation by the IAA.