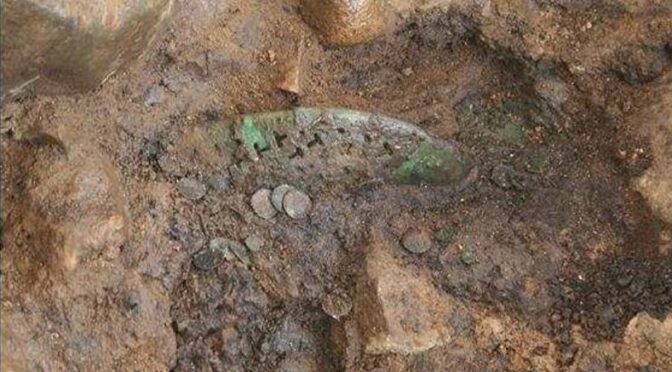 NORTH GYEONGSANG PROVINCE, SOUTH KOREA—According to a Korea Herald report, a pair of gilt-bronze shoes thought to date to the late fifth or early sixth century A.D. was found in one of three tombs at a burial site in Gyeongju, the ancient capital of the Silla Kingdom in eastern South Korea.

The tomb also contained saddles, bronze ware, iron pots, and earthenware. Researchers from the Silla Cultural Heritage Research Institute said such shoes were covered with T-shaped holes and were only used for funeral ceremonies.

The shoes were newly excavated from an ancient Silla tomb in Gyeongju for the first time in 43 years.

A pair of gilt bronze shoes, a silver plate to embellish a belt, and horse harness ornaments were excavated from Tomb No. 120-2 in Hwangnam-dong, Gyeongju, the Cultural Heritage Administration announced on Wednesday.

Gilt bronze shoes from the Silla Kingdom were intended for funerals, not everyday use. This is the first time that such shoes were found from an ancient Silla tomb in Gyeongju since 1977 in ancient tombs in Inwang-dong.

The pair of shoes featuring T-shaped holes on the surface and Buddhist gilt bronze ornaments were discovered near the feet of the buried body.

The excavation process for the shoes is still ongoing as of Wednesday. Gilt bronze shoes of a similar shape were found from the southern mound of Hwangnam DaeChong tomb in Gyeongju.

“The presence of gilt bronze shoes suggests that the buried person was from a royal family,” said senior researcher Kim Kwon-il at the Silla Cultural Heritage Research Center, which is in charge of the excavation.

The Cultural Heritage Administration said the Buddhist ornaments may have been used as part of or to decorate a hat. For grave goods, various horse harness ornaments, including a gilt bronze saddle and other gilt bronze embellishments, bronze irons, cast iron cauldrons, and earthware were found.

Tomb No. 120 in Hwangnam-dong is located in the Daereungwon royal tomb site. A tomb number was assigned but the past existence of an ancient tomb was unclear as a private residence was built on the site.

The Cultural Heritage Administration and the Gyeongju municipal government identified additional tombs in the north and south of Tomb No. 120 during its excavation last year.