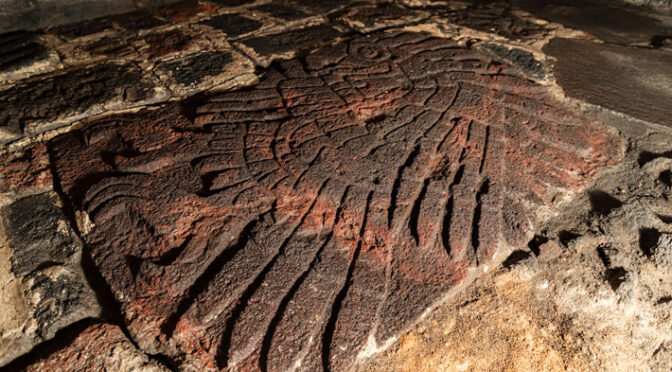 According to a statement released by Mexico’s National Institute of Anthropology and History (INAH), archaeologists led by Rodolfo Aguilar Tapia have uncovered a bas-relief sculpture of a golden eagle in the floor of the Aztec chapel dedicated to Huitzilopochtli at the Templo Mayor.

The well-preserved floor surface was covered during an expansion of the temple before the arrival of the Spanish in Tenochtitlan in the sixteenth century, Tapia explained.

“From what we have seen through photographs, it is a very beautiful piece that shows the great secrets that the Templo Mayor of Mexico Tenochtitlan has yet to reveal to us. I want to extend my appreciation to the INAH archaeologists who collaborate in this space, since, thanks to their effort and dedication, we can continue to recover our history and our memory.

Due to the health contingency, the fieldwork has had to be postponed, however, it is clear that there is also an important work of research and academic reflection that has not stopped “, said the Secretary of Culture, Alejandra Frausto Guerrero, about this notable finding.

Although it was in February 2020 when a multidisciplinary team concluded the release and cleaning of this itzcuauhtli , a Nahua voice that means “obsidian eagle”, and with which the Mexica referred to the golden eagle ( Aquila chrysaetos canadensis ), it is now, when his investigation in the cabinet has been deepened, the finding is made known.

Carved on red tezontle and with dimensions of 1.06 meters long by 70 centimetres wide, this bas-relief is the largest in a set of 67 similar elements found so far in the Templo Mayor.

According to specialists, the relevance of the sculpture is denoted not only by its size and finish but also by its location, at the foot of the most important building for the Mexica and in the central axis that crosses the ‘chapel’ of Huitzilopochtli and the monumental sculpture of the goddess Coyolxauhqui. It is also close to Cuauhxicalco, a circular building whose name translates as “place of the eagle’s gourd”, where, according to 16th-century documents, the ritual cremations of the Tenochca rulers were carried out.

Regarding the discovery of the bas-relief, the archaeologist assigned to the PTM, Rodolfo Aguilar Tapia, who investigated the piece together with the interns in archaeology Mary Laidy Hernández Ramírez and Karina López Hernández; and in physical anthropology, Jacqueline Castro Irineo, from the National School of Anthropology and History, reported that it was verified during the ninth field season of the PTM.

This season, directed by the head of the Project, the archaeologist Leonardo López Luján, has focused on exploring under the ‘liga bridge’ that connects the streets of Guatemala and Argentina, wherein pre-Hispanic times the west plaza of the Sacred Precinct was located of Mexico-Tenochtitlan. The sculptural carving was part of a floor of that space, which would have been in use during the government of Motecuhzoma Ilhuicamina, between the years 1440 and 1469 of our era.

“This floor is unique in the entire Templo Mayor as it contains bas-reliefs that allude to the dual conception of the building. On the south side, where we are exploring, there are elements like this eagle, linked to the mythical cycle of the birth of Huitzilopochtli; while to the north, the bas-reliefs located earlier —the first in 1900 by Leopoldo Batres, and the later by the PTM and the Urban Archeology Program (PAU) – contain representations associated with Tláloc, the water cycle and the regeneration of corn “.

Aguilar Tapia specifies that thanks to the work carried out by archaeologists Eduardo Matos Moctezuma and Leonardo López Luján, today there is a defined stratigraphic correspondence, which allows researchers to know in which construction stage of the Templo Mayor the findings are located, and at what time belong the same.

Thus, he exemplifies, when the exploration at the aforementioned intersection began, the floor that the archaeologists saw was from Stage VI of the Templo Mayor, corresponding to the government of Ahuítzotl between 1486 and 1502, while now, after meticulous excavations, specialists have managed to reach Stage IV-a, that is, they have gone back in time to the 1440s and to the period of government of Motecuhzoma I.

The aforementioned plaza floor was covered since pre-Hispanic times during the expansion of the Templo Mayor. “That is why it has a good state of conservation,” says the researcher, noting that “it is an element that was never seen by the Spanish.”

The symbolism of the golden eagle

The pause in the fieldwork that the COVID-19 pandemic brought with it, allowed the PTM researchers to carry out the investigation of various elements, including the bas-relief. Among other aspects, the iconographic representations that exist of the golden eagle in historical sources such as the codices were studied, in order to correlate them with the sculpture discovered at the foot of the Templo Mayor.

One of those representations, Aguilar Tapia points out, is in Plate 50 of the Codex Borgia, where a golden eagle is shown posing on top of a mesquite tree, a tree that rises from a stark deity. “The interesting thing is that this image is iconographically very similar to the bas-relief that we find in the field, in both representations the feathers end in the shape of sacrificial knives, which allude to the Nahua name of the bird: obsidian eagle.”

For the Mexica, this bird of prey was closely related to war and sacrifice, while it was considered a nahual of the sun and, therefore, also of its tutelary god, Huitzilopochtli.

In the incoming seasons of the PTM field, the researcher concludes, the actions will focus on completing the exploration of the floor where the bas-relief is located to look for more others and then, with extreme care, temporarily remove them and be able to investigate under them in search of offerings or other architectural elements. “After all this exploratory process, with the support of restoration specialists, we will place each bas-relief in its precise place”, he concludes.

Similar elements could also be found when the excavations around Cuauhxicalco are resumed. The intention of the PTM is that, after its investigation, the bas-reliefs can be shown to the public in their original position: at the west foot of the Templo Mayor.