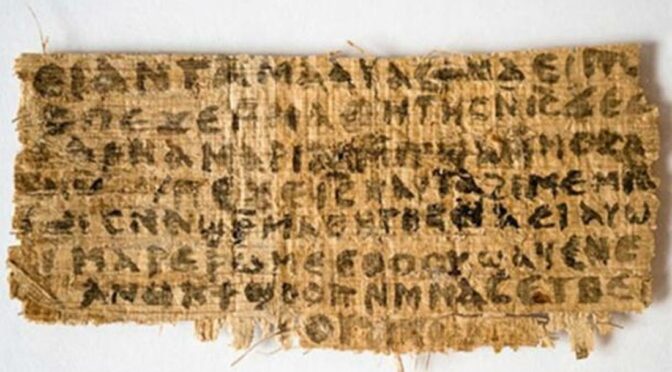 Did Jesus Have a Wife? New Tests on Ancient Coptic Papyrus May Give Answers

The much-debated gospel, if legitimate, might show that at one point it was believed Jesus had taken wife, contrary to the current doctrines of Christianity.

In 2012, Harvard University professor Karen L. King revealed the faded papyrus, which quickly became the international headlines. The announcement of a papyrus which might alter the historical record of Christian faith was met with elation, anger, and skepticism.

The text is known now as the “ The Gospel of Jesus’s Wife ” is written in Coptic (an Egyptian language), mentions a woman named Mary, and contains the translated phrases, “ Jesus said to them, my wife….”, and ” she will be able to be my disciple,” which suggests not only that Jesus may have married (some belief to Mary Magdalene) but also it raises the argument for women to become ordained priests.

An editorial in the Vatican’s newspaper declared that the papyrus was a fake, as did a number of other scholars. Additionally, the Church of England has dismissed the claims, saying it is closer to the fictional ‘Da Vinci Code’ than historical accounts.

However, the fragment has been thoroughly tested by scientists who conclude, in a report published in the  Harvard Theological Review, that the ink (actually pigment) and papyrus have ancient origins, and the fragment is not, therefore, a modern forgery. The researchers date it to 1,200 years ago, between the sixth and ninth centuries.

According to LiveScience, new research has been done on the disputed papyrus but the study has yet to be published.  Scientists at Columbia University are conducting new tests on the pigments used on the papyrus. When compared with the pigments from other known authentic or fraudulent gospels, comparisons can be made and legitimacy established.

Scientists at Columbia University are not commenting until their results are published, but according to the LiveScience article, the Jesus gospel was compared to another fragment from the “Gospel of John”, which was written in a rare ancient dialect of Coptic known as Lycopolitan.

The two texts are said to be very similar, but the John gospel dates to between the seventh and ninth centuries, leading some to say “The Gospel of Jesus’s Wife” was a fake modeled after this.

However, “James Yardley, a senior research scientist at Columbia University, told Live Science that the new tests suggest that the Gospel of Jesus’s Wife was written by another person than that who wrote John papyrus,” reports MailOnline.

Yardley told LiveScience, “In our first exploration, we did state that the inks used for the two documents of interest [the John papyrus and the Gospel of Jesus’s Wife] were quite different. The more recent results do confirm this observation strongly.”

Additionally, the language on the fragment has been examined, and many scholars say it is also very similar to the early Christian “ Gospel of Thomas ”.

This gospel can be found online with modern-day typos. Skeptical scholars point out similar typos in the Jesus gospel, but proponents rebut, saying that typos and grammatical errors were just as prevalent in ancient scribe-work as they are now, and the Jesus gospel is another interesting example of that.

What remains to be sorted out is the mysterious provenance (source or chronology) of the artifact. Many scholars are drawing their own conclusions that the papyrus is a modern fake, and that opinion is supported by the unclear ownership of the piece, and where it might have originated.

The person who currently owns the ancient papyrus remains anonymous but claims the gospel came to him with other Coptic texts from Germany. The texts were reportedly purchased from a man named Hans-Ulrich Laukamp in 1999, who himself allegedly got them in 1963 in Potsdam, in what was East Germany.

The claim that Laukamp previously owned the gospel text has been strongly disputed by his former friends and business partners. Laukamp died in 2002, and representatives of his estate say Hans-Ulrich had no interest in antiquities and did not collect them.

Further, he was living in West Berlin in the ’60s, and due to the infamous wall that divided Berlin from 1961 to 1989, it was improbable he crossed into East Berlin to acquire artifacts. Laukamp had no children or living relatives to confirm or deny the claims.

The LiveScience article points out that Laukamp’s handwritten signature can be located online on notarized documents from between 1997 and 2001, and these could be compared to the signature on the sales documents provided by the current anonymous owner.

Last year in a Harvard Theological Review article professor King said that the anonymous owner, “provided me with a photocopy of a contract for the sale of ‘6 Coptic papyrus fragments, one believed to be a Gospel’ from Hans-Ulrich Laukamp, dated Nov. 12, 1999, and signed by both parties.” Further, King notes that “a handwritten comment on the contract states, ‘Seller surrenders photocopies of correspondence in German. Papyri were acquired in 1963 by the seller in Potsdam (East Germany).’”

Until comparisons are made between known signatures and those on the contracts, the provenance of the artifact remains unverified.

If it can be shown Laukamp did indeed get the enigmatic papyrus from East Germany, where did it come from before that? Discovering the true origins of the ancient artifact will go a long way in determining authenticity.

Until conclusive evidence can be shown that reveals “The Gospel of Jesus’s Wife” is indeed a convincing forgery, all experts can go on for now is the ancient date of the ink and interpretations of the timelines of the Coptic language. As this ancient papyrus presents such a controversial idea, the debate will undoubtedly rage until then.