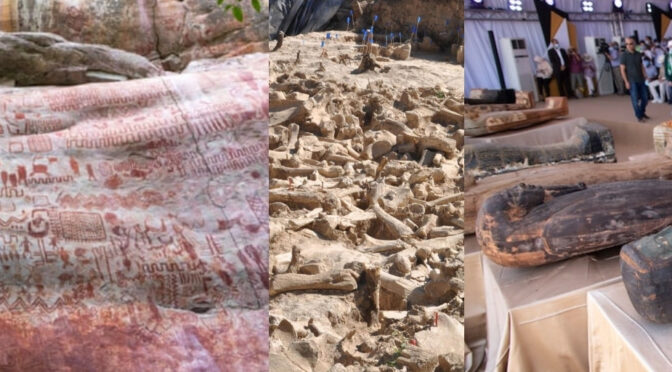 Here is the list of top 10 Archaeological Discoveries of 2020

Archaeology is the closest thing we have to a time machine. Instead of using flux capacitors, however, archaeologists rely on technology like ground-penetrating radar, scanning electron microscopes, DNA sequencing, and of course, the good-old-fashioned shovel.

Equipped with the right tools and techniques, the work of these scientists allows us to reconstruct the past and imagine things as they once were.

Years from now, when we look back on the year that was 2020, archaeology won’t be the first thing that comes to mind. But that’s not to say it wasn’t a good year for this important scientific discipline, here is the list of the 10 most prominent archaeological discoveries to hit the headlines in 2020.

Melting Ice Reveals a “Lost” Viking-era Highway in Norway’s Mountains As the glaciers of Scanadvia melt, the long-forgotten journeys of intrepid Vikings are revealed.

Reported in the journal Antiquity today, a retreating Lendbreen glacier in the mountains of Norway has recently revealed a mountain pass used by Vikings over 1,000 years ago, along with a treasure trove … Continue reading Melting Ice Reveals a “Lost” Viking-era Highway in Norway’s Mountains→

Mexico: 3,000-year-old Mayan ceremonial complex discovered in Tabasco In the latest breakthrough discovery of lost civilization, researchers have found the largest and the oldest Mayan site through a unique laser technology called lidar.

It looked like a white splotch on the underside of a Neanderthal stone tool. But a microscope showed it was a bunch of fibres twisted around each other. Further examination revealed it was the first direct evidence that Neanderthals could make string, and the oldest known direct evidence for string-making overall, researchers say.

The find implies our evolutionary cousins had some understanding of numbers and the trees that furnished the raw material, they say. It’s the latest discovery to show Neanderthals were smarter than modern-day people often assume. Continue Reading……..

Massive Prehistoric Monument Detected Near Stonehenge Two miles from Stonehenge, a series of ancient shafts excavated thousands of years ago has been found.

Analysis of the 20 or more shafts suggests the features are Neolithic and excavated more than 4,500 years ago – around the time the nearby ancient settlement of Durrington Walls was built. … Continue reading Massive Prehistoric Monument Detected Near Stonehenge→

5. An Ice Age Structure Made From the Bones of 60 Mammoths

A Mysterious 25,000-Year-Old Structure Built of the Bones of 60 Mammoths Mysterious bone circles consisting of hundreds of mammoths bones helped scientists understand how people survived the last ice age. According to a new analysis, the bones at one location in Russia were more than 20,000 years old. The wall of the 30 ft building was … Continue reading

Nearly 100 coffins buried over 2,500 years ago found in Egypt On 14 November, Egyptian antiquities officials declared the discovery. Some of the coffins had mummies inside them, the officials said.

Archaeologists discovered as many as 13 coffins from a burial ground in Egypt back in September that was believed to have been sealed for … Continue reading Nearly 100 coffins buried over 2,500 years ago found in Egypt→