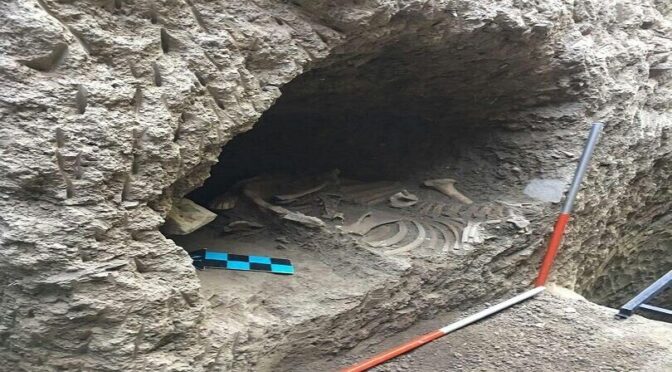 Archeologists found an ancient burial with the bones of a horse-estimated to be four years old-in Tepe Ashraf, the sole archaeological hill in Isfahan, central Iran.

The skeleton of the horse was discovered next to the place where a giant jar-tomb was unearthed last month, which researchers believe could shed new light on ancient human life in Isfahan.

“The burial of this horse with its head turned towards the animal’s body, shows an official burial which was practiced during the early years of the Parthian era (247 BC – 224 CE).

In this type of burial, the animal’s body was buried next to its owner, who had died,” IRNA quoted senior archaeologist Alireza Jafari-Zand as saying on Tuesday.

Jafari-Zand, who heads the archaeological excavation at the hill, explained: “Evidence came to light from some Parthian cemeteries, being excavated in northern Iran, shows that the deceased’s horse was buried next to him, and this fully shows that we have the same burial [tradition] in Isfahan, the discovery of this type of burial in Ashraf hill is of high importance for the history of Isfahan because no such phenomenon has been reported in central Iran so far.”

“Tepe Ashraf is the second place after the Tepe Sialk (in Isfahan province) that has yielded the discovery of such jar tombs that offers valuable clues to uncover the obscure history of pre-Islamic Isfahan,” Jafari-Zand said.

Excavations at Tepe Ashraf initially began in 2010 when Jafari-Zand announced his team found evidence at the site suggesting that the Sassanid site had also been used during the Buyid dynasty (945–1055).

“We stumbled upon a reconstructed part in the ruins of the castle, which suggests that the structure had been used during the Buyid dynasty

“Isfahan is a city, which has never died over the history… and the old Isfahan is beneath the modern city. Thus, normally, archaeological excavation is impossible in the city,” according to Jafari-Zand who believes that the mount keeps a part of the history of Isfahan and Iran in its heart.

The mound has seriously been damaged on the northern side by the construction of a street. Besides, unscientific excavations carried out by several archaeology interns in 1987 disturbed the historical strata in a part of the site.

Soaked in a rich history, Isfahan was once a crossroads of international trade and diplomacy in Iran during the 16th and 17th centuries, and now it is one of Iran’s top tourist destinations for good reasons.

It’s a city for walking, getting lost in its mazing bazaars, dozing in beautiful gardens, and meeting people. It has long been nicknamed as Nesf-e-Jahan which is translated into “half of the world”, suggesting that seeing it is equivalent to seeing half of the world.