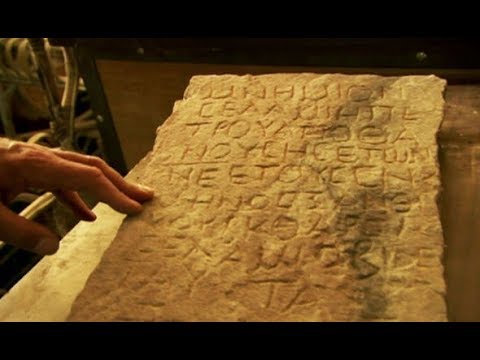 We witnessed some biblical discoveries this year which proved true in many histories such as the watchtower of the 8th century, the church of the 5th century, a settlement connected to the crucifixion of Jesus among others.

Nevertheless, the scholars were surprised when archeologists had uncovered an almost similar text to the Dead Sea Scroll.

Jesus was born in 4 AD and crucified, it is said, by crucifixion somewhere between 30AD and 33AD and by resurrection three days later. through the resurrection, he came back. But a discovery in the 21st century shook off that belief.

A team of archaeologists discovered Gabriel stone, which was a tablet with 87 lines of Hebrew text from the Dead Sea that also includes some controversial prophecies.

The biblical investigator Simcha Jacobovici recently explained these texts which date back to the 1st century BC.

The experts stated that “Perea is located on the Jordanian side of the Dead Sea, it is here that the most famous writings ever were unearthed. Discovered in 1948, the more than 2,000-year-old documents are the oldest biblical texts ever found.”

It should be noted that after the discovery of the Gabriel Inscriptions, archaeologists were stunned and when scholars deciphered it, they were startled by the fact that they were looking at the Dead Sea Scroll on a stone, said Jacobovici.

Recently during Amazon Prime’s “Decoding the Ancients” series, Jacobovici mentioned that the similarities between the Gabriel inscriptions and the scrolls are impressive as both are written in ink, both the texts are written in two columns and have the Hebrew letters suspended from the upper guidelines.

Jacobovici said that this suggests that the stone, like the scrolls, originates from the shores of the Dead Sea.

“So in search of a Gabriel-like stone in the area of Perea, Simcha travels here to meet with archaeologist Konstantinos Politis, who’s been digging in this area for 20 years.

Among the artifacts unearthed by Politis, Simcha is struck by the ancient Jewish and Christian gravestones reminiscent of the Gabriel Inscription. And Politis has a lot more artifacts like this,” said the expert.

The discovery of Gabriel’s inscription has caused controversy due to its context. An expert in Talmudic and biblical language at Jerusalem’s Hebrew University, Israel Knohl, translated line 80 from the inscription which says, “in three days, live, I Gabriel command you”.

As per his interpretation, it was a command from the angel Gabriel who asked (someone) to rise from dead after three days. But he also understood that the recipient of this command was Simon of Peraea, a Jewish rebel who was killed by the Romans in 4the century BC.

However, later in 2011, Knohl accepted that “sign” is more relevant than “live” but the latter is a possible reading. No wonder, the year 2019 has witnessed some Biblical findings resurface to make these them relevant and controversial yet again.