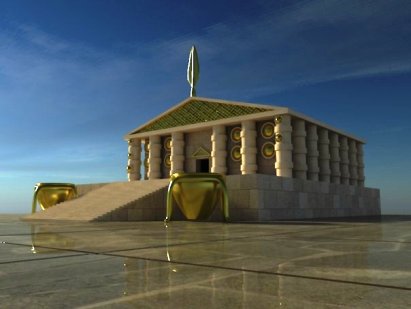 Life-size human statues and column bases from a long-lost temple dedicated to a supreme god have been discovered in the Kurdistan region of northern Iraq.

The discoveries date back over 2,500 years to the Iron Age, a time period when several groups — such as the Urartians, Assyrians and Scythians — vied for supremacy over what is now northern Iraq.

“I didn’t do excavation, just archaeological soundings —the villagers uncovered these materials accidentally,” said Dlshad Marf Zamua, a doctoral student at Leiden University in the Netherlands, who began the fieldwork in 2005.

The column bases were found in a single village while the other finds, including a bronze statuette of a wild goat, were found in a broad area south of where the borders of Iraq, Iran and Turkey intersect.

For part of the Iron Age, this area was under the control of the city of Musasir, also called Ardini, Marf Zamua said. Ancient inscriptions have referred to Musasir as a “holy city founded in bedrock” and “the city of the raven.”

“One of the best results of my fieldwork is the uncovered column bases of the long-lost temple of the city of Musasir, which was dedicated to the god Haldi,” Marf Zamuatold Live Science in an email.

Haldi was the supreme god of the kingdom of Urartu. His temple was so important that after the Assyrians looted it in 714 B.C., the Urartu king Rusa I was said to have ripped his crown off his head before killing himself.

He “threw himself on the ground, tore his clothes, and his arms hung limp. He ripped off his headband, pulled out his hair, pounded his chest with both hands, and threw himself flat on his face …” reads one ancient account (translation by Marc Van De Mieroop).

The location of the temple has long been a mystery, but with the discovery of the column bases, Marf Zamua thinks it can be narrowed down.

Additionally, Marf Zamua analyzed an ancient carving of Musasir, discovered in the 19th century at Khorsabad. The carving, he found, shows hillside houses with three windows on the second floor and a doorway on the ground floor. Such a design can still be seen today in some villages, the bottom floor being used as a stable and storage area, he noted.

This long-lost temple is just the tip of the archaeological iceberg. During his work in Kurdistan, Marf Zamua also found several life-size human statues that are up to 7.5 feet (2.3 meters) tall. Made of limestone, basalt or sandstone, some of these statues are now partly broken.

They all show bearded males, some of whom “are holding a cup in their right hands, and they put their left hands on their bellies,” said Marf Zamua. “One of them holds a hand axe. Another one put on a dagger.”

Originally erected above burials, the statues have a “sad moment” posture, Marf Zamua said. Similar statues can be found from central Asia to eastern Europe. “It is art and ritual of nomads/pastorals, especially when they [buried] their chieftains,” Marf Zamua said.

Mostof the newfound statues date to the seventh or sixth century B.C., after Musasir fell to the Assyrians, and during a time when the Scythians and Cimmerians were advancing through the Middle East.

Over the past few weeks, conflict in Iraq has been increasing as a group called the “Islamic State in Iraq and the Levant” (ISIS) has taken several cities and threatened to march on Baghdad. The Kurdistan area, including this archaeological site, is autonomous, and its militia has been able to prevent ISIS from entering it.

Marf Zamuasaid there are risks associated with living and working in the border area. Due to the conflicts of the past few decades, there are numerous unexploded land mines, one of which killed a young shepherd a month back, he said. Additionally, the National Iraqi News Agency reports that Iranian artillery recently fired onto the Iraqi side of the border, and there have been past instances where planes from Turkey have launched attacks into Iraqi Kurdistan.

Despite these risks, there are also terrific archaeological finds to be made. In addition to the statues and column bases, Marf Zamuafound is a bronze statuette of a wild goat about 3.3 inches (8.4 centimetres) long and 3.2 inches (8.3 cm) tall. Researchers are now trying to decipher a cuneiform inscription on the statuette.

Marf Zamua presented the discoveries recently in a presentation given at the International Congress on the Archaeology of the Ancient Near East, held at the University of Basel in Switzerland. In addition to his doctoral studies, Marf Zamua teaches at Salahaddin University in Erbil, which is the capital of Iraqi Kurdistan.