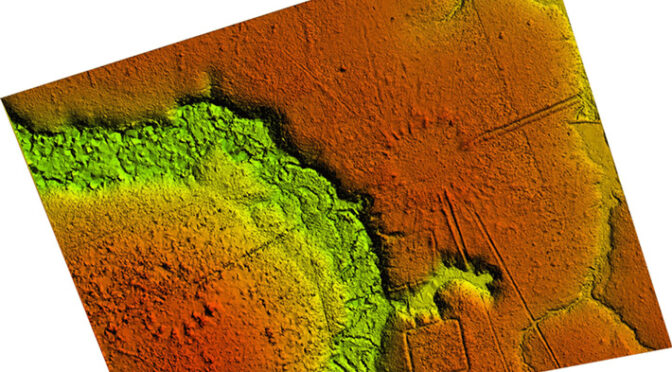 Jose Iriarte and Mark Robinson of the University of Exeter and their multinational team of scientists explored Brazil’s southern Acre State with Lidar remote sensing equipment, according to a statement issued by the University of Exeter, and revealed a sequence of more than 35 villages dating from A.D. 1300 to 1700 in the thick vegetation of the Amazon.

This is further evidence the rainforest has long-been occupied by indigenous communities, whose cultures rose, fell, transformed, and rose again, long before Europeans made an impact in the Americas.

The research shows after the abandonment of the large geometrically patterned ceremonial earthworks, around AD 950, a new culture arose with communities living in mounded villages with highly defined concepts of social and architectural space.

The circular mound villages are connected across the wider landscape through paired sunken roads with high banks that radiate from the village circle like the marks of a clock or the rays of the sun.

The survey reveals that the straight roads often connect one village to another, creating a network of communities over many kilometres.

Deforestation in the region had previously revealed the presence of large geoglyph earthworks on the landscape with archaeological research also documenting the presence of circular mound villages.

However, until now the extent of earthwork constructions, their architectural layouts, and their regional organisation remained hidden beneath the remaining dense tropical forest.

Experts from the UK and South America used a RIEGL VUX-1 UAV Lidar sensor integrated into an MD 500 helicopter to document architectural features below the forest canopy, revealing a more complex and spatially organised landscape than previously thought.

Over 35 villages and dozens of roads were documented in the research with many more predicted to still be hidden below the unexplored jungle.

The villages were composed of 3 to 32 mounds arranged in a circle, the diameter of which ranged from 40 m to 153 m with the area enclosed by the central plaza ranging from ~0.12 to 1.8 ha.

The findings are published in a paper in the Journal of Computer Applications in Archaeology and footage of Jose Iriarte and Ella Al-Shamahi locating the village on foot, can be seen on the programme Jungle Mystery: Lost Kingdoms of the Amazon on Channel 4 at 6.30 pm on 5th December.

Professor Iriarte said: “Lidar has allowed us to detect these villages, and their features such as roads, which wasn’t possible before because most are not visible within the best satellite data available. The technology helps to show diverse and complex construction history of this part of the Amazon.

“Lidar provides a new opportunity to locate and document earthen sites in forested parts of Amazonia characterized by dense vegetation. It can also document the smallest surficial earthen features in the recently opened pasture areas.”