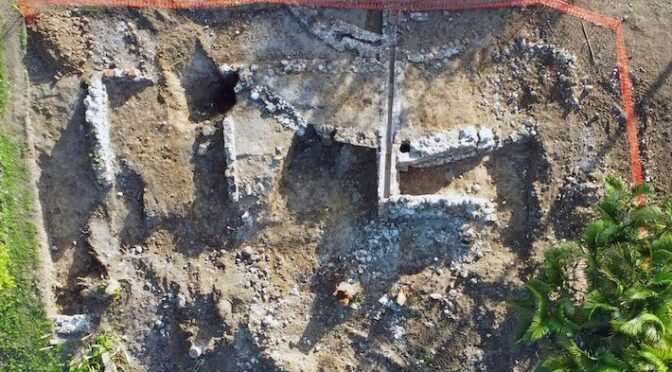 A recent excavation of a historical estate on a Caribbean island found stories from the past hiding in plain sight in wooden posts and rectangular stones.

The Estate of Château Gaillard in Trois-Ilets sits by the ocean on the south side of Martinique, a French territory and part of the Lesser Antilles islands in the Caribbean.

Researchers began excavation of the site ahead of a development project that would build new housing on the historical property.

The historical property sits by the ocean and included a mansion house, living quarters for enslaved people and an animal mill.

Measuring about 50 feet across, a circular structure was unearthed with indications that wooden rollers wrapped in iron and pulled by oxen or mules had been used to crush sugar cane and collect the sweet juice inside later refined into sugar loaves.

The animal mills were operated by enslaved people during the 18th century, and housing for these workers was also found on the estate.

The researchers found living quarters aligned in rows on the west side of the property, built with perishable materials, like wood, compared to the stone of the main house.

The industrial revolution reached Martinique in the 1820s and 30s, rendering animal mills obsolete, according to a news release from the Institut National de Recherches Archéologiques Préventives.

The introduction of the steam engine meant animal strength was no longer needed to crush the sugar cane.

Shortly after, in 1848, slavery was abolished in Martinique, changing society as a whole. The Chateau Gaillard estate now had to find a new use for its buildings and resources.

Researchers say they found evidence the huts were transformed into housing for seasonal workers that would harvest sugar cane during the months of February to June.

Along the east facade of what remains of the workers hut, researchers also found coins, bottle caps and furniture items, suggesting the building was used as a residential shop into the 20th century. They even found a glass bottle labeled “Super,” a popular soda from the 1950s among the historical stones.

The excavation was the first of its kind in Martinique, showing how the small island territory transitioned through the 18th and 19th centuries.