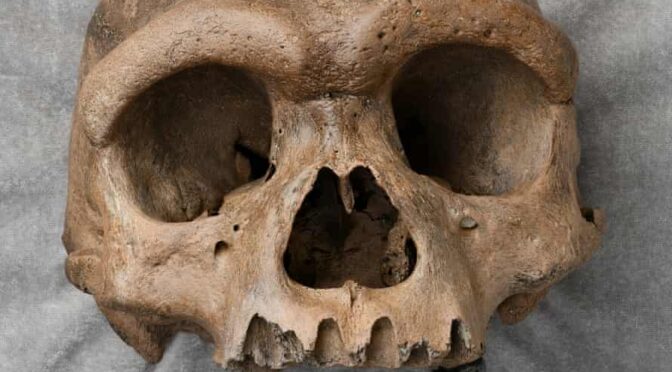 According to a Science Magazine report, palaeontologist Qiang Ji of Hebei GEO University and his colleagues have examined a hominin skull discovered on the banks of the Songhua River in northeastern China in 1933.

Almost 90 years ago, Japanese soldiers occupying northern China forced a Chinese man to help build a bridge across the Songhua River in Harbin. While his supervisors weren’t looking, he found a treasure: a remarkably complete human skull buried in the riverbank.

He wrapped up the heavy cranium and hid it in a well to prevent his Japanese supervisors from finding it. Today, the skull is finally coming out of hiding, and it has a new name: Dragon Man, the newest member of the human family, who lived more than 146,000 years ago.

In three papers in the year-old journal The Innovation, palaeontologist Qiang Ji of Hebei GEO University and his team call the new species Homo longi. (Long means dragon in Mandarin.) They also claim the new species belongs to the sister group of H. sapiens, and thus, an even closer relative of humans than Neanderthals. Other researchers question the idea of a new species and the team’s analysis of the human family tree.

But they suspect the large skull has an equally exciting identity: They think it may be the long-sought skull of a Denisovan, an elusive human ancestor from Asia known chiefly from DNA.

Paleoanthropologist Marta Mirazón Lahr of the University of Cambridge, who was not involved in the work, says she’s “skeptical of the statements about humans’ long-lost sister lineage.” But she and others are thrilled with the find. “It’s a wonderful skull; I think it’s the best skull of a Denisovan that we’ll ever have,” says paleoanthropologist Jean-Jacques Hublin of the Max Planck Institute for Evolutionary Anthropology.

The stunning skull was brought to light by the bridge builder’s grandchildren, who retrieved it from the well after their grandfather told them about it on his deathbed. They donated it to the Geoscience Museum at Hebei GEO University. But before Ji could ask him precisely where he found the fossil, the man died, leaving the researchers uncertain of its geological context.

With no geological context, Ji enlisted several researchers to help date the skull. Griffith University, Nathan, geochronologist Rainer Grün and colleagues linked strontium isotopes in sediment encrusted in its nasal cavities to a specific layer of sediments around the bridge, which they dated to between 138,000 and 309,000 years ago. Uranium-series dating on the bone also gives it a minimum age of 146,000 years.

Next, the researchers tried to identify the skull. Paleoanthropologist Xijun Ni of the Chinese Academy of Sciences and Hebei GEO University, who led the effort, was initially puzzled: The massive skull had a brain comparable in size to that of modern humans. But it couldn’t be a member of H. sapiens because it had larger, almost square eye sockets, thick brow ridges, a wide mouth, and a huge molar.

Ni, who is also a palaeontologist who studies fossil dinosaurs and primates, used computational statistical methods to build and analyze a data set of more than 600 traits from the skull, such as measurements of its length and brow size, as well as the presence or absence of traits such as wisdom teeth. He compared 55 traits from 95 other fossilized skulls, jaws, or teeth from the genus Homo from around the world.

The computer model sorted the fossils into family trees, finding the tree that fits best with the data had four main clusters. The new skull nestled in a cluster whose branches included several skulls from China’s Middle Pleistocene, a period 789,000 to 130,000 years ago when several lineages of hominins coexisted.

Within the cluster of Chinese fossils, the new skull was most closely related to a jawbone from Xiahe Cave on the Tibetan Plateau. Proteins in that jawbone, as well as ancient DNA in the sediments of the cave, strongly suggest it was a Denisovan, a close relative of Neanderthals who lived in Denisova Cave in Siberia off and on from 280,000 to 55,000 years ago and left traces of its DNA in modern people.

To date, the only clearly identified Denisovan fossils are a pinkie bone, teeth, and a bit of skull bone from Denisova Cave. But the enormous, “weird” molar from the new find fits with the molars from Denisova, says Bence Viola, a paleoanthropologist at the University of Toronto who analyzed them with Hublin.

The paper authors acknowledge that the find could be a Denisovan. And Chris Stringer, a paleoanthropologist at London’s Natural History Museum and co-author on two of the papers, says so directly: “I think it probably is a Denisovan.”

But the team has not yet tried to extract ancient DNA or proteins from the skull or molar to test that idea. In the meantime, their analysis showed the cluster of Chinese fossils was closer to early H. sapiens than to Neanderthals who were alive at the same time, Ni says. “It is widely believed that the Neanderthal belongs to an extinct lineage that is the closest relative of our own species. However, our discovery suggests that the new lineage we identified that includes Homo longi is the actual sister group of H. sapiens.”

Although other researchers are stunned by the size and completeness of the skull, many are critical of the analysis. “When I saw this analysis, I nearly fell off my chair,” Hublin says.

They question how the skull was found to be closely related to the Xiahe jawbone because there are no overlapping traits to compare as the skull has no jawbone. Also, DNA studies reveal modern humans are more closely related to Neanderthals than Denisovans; if the Xiahe jawbone is indeed from a Denisovan, the new skull’s closest relative is likely a Neanderthal, not H. sapiens. “It’s premature to name a new species, especially a fossil with no context, with contradictions in the data set,” says María Martinón-Torres, a paleoanthropologist at CENIEH, the national centre for research on human evolution in Spain.

For now, the paper authors say they do not want to risk destroying the tooth or other bone to get DNA or protein. But other researchers hope that work happens soon. Viola, for one, says he hopes that one day, “I can finally look into the eyes of a Denisovan.”