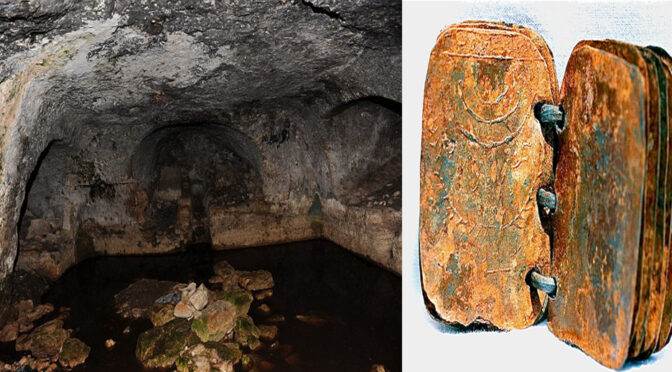 The discovery of seventy ancient metal books in a cave in Jordan is said to have the possibility of unlocking some of the secrets of the earliest days of Christianity.

The tiny books, their lead pages bound with wire, have left academics divided over their authenticity, but they say that if they are verified, they could prove as pivotal as the discovery of the Dead Sea Scrolls in 1947.

The pages are not much bigger than a credit card, and on them are images, symbols and words that appear to refer to the Messiah and, possibly even, to the Crucifixion and Resurrection.

Adding to the intrigue, many of the books are sealed, prompting academics to speculate they are actually the lost collection of codices mentioned in the Bible’s Book Of Revelation.

The books were discovered five years ago in a cave in a remote part of Jordan to which Christian refugees are known to have fled after the fall of Jerusalem in 70AD.

Important documents from the same period have previously been found there, and initial metallurgical tests indicate that some of the books could date from the first century AD.

This estimate is based on the form of corrosion, which has taken place, which experts believe would be impossible to achieve artificially. If the dating were verified, the books would be among the earliest Christian documents, predating the writings of St Paul.

David Elkington, a British scholar of ancient religious history and archaeology, and one of the few to have examined the books says they could be “the major discovery of Christian history”. “It is a breathtaking thought that we have held these objects that might have been held by the early saints of the Church,” the Daily Mail quoted him as saying.

“It is vital that the collection can be recovered intact and secured in the best possible circumstances, both for the benefit of its owners and for a potentially fascinated international audience,” he said. The books’ whereabouts are also a mystery, as after a Jordanian Bedouin discovered them, an Israeli Bedouin, who is said to have illegally smuggled them across the border into Israel, where they remain, acquired the lot.

The Jordanian Government is now working at the highest levels to repatriate and safeguard the collection. Philip Davies, emeritus professor of biblical studies at Sheffield University, said there was powerful evidence that the books have a Christian origin in plates cast into a picture map of the holy city of Jerusalem.

“As soon as I saw that, I was dumbstruck. That struck me as so obviously a Christian image,” he said. “There is a cross in the foreground, and behind it is what has to be the tomb of Jesus, a small building with an opening, and behind that the walls of the city.

“There are walls depicted on other pages of these books too and they almost certainly refer to Jerusalem. It is a Christian crucifixion taking place outside the city walls.

“The possibility of a Hebrew-Christian origin is certainly suggested by the imagery and, if so, these codices are likely to bring dramatic new light to our understanding of a very significant but so far little understood period of history,” he stated.

The British team leading the work on the discovery fears that the present Israeli “keeper” may be looking to sell some of the books onto the black market, or worse – destroy them. But the man who holds the books denies the charge and claims they have been in his family for 100 years.

“The Book of Revelation tells of a sealed book that was opened only by the Messiah,” Dr Margaret Barker, a former president of the Society for Old Testament Study, said. “Other texts from the period tell of sealed books of wisdom and of a secret tradition passed on by Jesus to his closest disciples. That is the context for this discovery,” she stated.